What can you tell us about your new upcoming book?
-> Basically, it's about two sisters. Hope, is fifteen and paralysed, the other, Lynne, is 25 and works in a crime lab. Hope is desperate for her sister to notice her, or even just accept that it's not her fault Lynne's life isn't what she wanted, and Lynne is desperate to move out, work her way into an early grave and ignore her sister's existence. Lynne is then accused of a crime she didn't commit and goes on the run, Hope takes it upon herself to prove her sister is innocent, but Lynne isn't too happy about that.

Does she manage it?
-> Of course! It wouldn't be much of a crime novel if she didn't! The whole book is told in diary entries from both women and they couldn't be more different, yet they don't seem to realise, or at least, Lynne doesn't seem to realise that she's angry at the wrong person. I won't disclose the ending, but Hope's actions go a long way into helping mend their relationship.

How long have you been writing?
-> I started writing seriously when I was nineteen, I'd just been diagnosed with two chronic conditions which alongside my other medical issues led to me spending a lot of time in a wheelchair. I'd been retired from my job on medical grounds and couldn't image spending the rest of my life doing nothing, so I started writing.

What did you first work on?
-> I began by tearing apart and rewriting a story I'd worked on with a friend for fun at school. I took out their parts completely and made the story into a workable book. It's definitely not my strongest book, but it's been released and seems to be doing well.

Which book was that?
-> "The Friendship Triangle". It was actually my first book, though people often assume it was "Blackout" because that was the one released first.

Why was that?
-> Basically, I had to choose what I thought would be my strongest book so far, which was "Blackout", because I was going down the self-published route. It worked out for me because later on I was picked up by my current publisher and have now had three more books published.

I heard that you write books in advance, so what are you working on now?
-> I'm actually writing books nine and ten, having just extended my contract to fifteen books instead of ten. I started writing two at the same time when I was working on number seven and was desperate to finish it and start book eight which was brewing in my head, so I worked on them both together and since it worked so well that time, I'm doing it again.

So, what will book six be?
-> You'll have to wait for more details, but I can tell you that it's the third in the "Dying Thoughts" Series, which I love writing. I am looking forward to moving along with it. It should be released in January/February 2013

When you're not writing, what are you doing?
-> I'm a university student. I'm working towards a Honours degree in Health and Social Care with The Open University. I play Ukulele as well and enjoy making music with that, it makes me smile and helps me relax. As well as that, I read and help to raise awareness of the conditions I live with.

Before we end, any advice to aspiring writers?
-> Get your work out there, anyway you can. If you can, get an agent as most publishers will not accept work from the general public, and they will help you with paying taxes. They will also do the leg work and some of them will not require payment until you begin earning and then they'll take a percentage. Most importantly, don't give up. Writing is a passion for me, it is for a lot of writers, and even when it seems like all you're doing is writing for yourself, that's okay, it's good to express yourself in anyway you can. Become thick skinned, people will reject your work and that's fine. Most of all, enjoy what you do!

LYNNE & HOPE
At this moment in time, Lynne & Hope is with the editor for a final read through and any corrections. It will be back with me in a few weeks and then I'll do the edits and sign off on any corrections and from there will send it back to publisher for its release date on July 11th 2012

The third book in the Dying Thoughts Series is in the beginning stages of being made ready or publication in January/February of 2013. First it will be read through by the editor who will then suggest edits and I'll begin the long job of editing and getting it ready, I have added a new member to my editing process, but in the interests of privacy, I will just say that she is looking forward to working with us all!. The plan for Dying Thoughts - Third Wish is for it to be released just after Christmas or during the February half term in the UK. Watch this space for information on release dates. 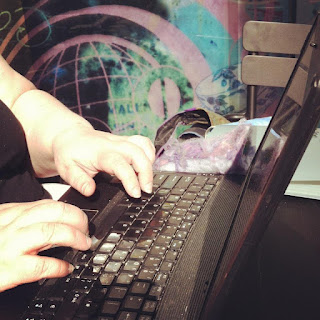 BOOKS UNDER CONSTRUCTION:
WAITING ON YOU
DYING THOUGHTS - FOURTH WEEK
DESTINATION:UNKNOWN
DYING THOUGHTS - FIFTH SECRET
All of the above titles are books that have either been finished and are awaiting their front cover design and editing or are in progress. Either way, they will not be released for at least just over a year from now, but watch this space for information regarding their release.
Posted by Joey Paul at 09:36 No comments: