Why Is Representation Important? - The Creative Process 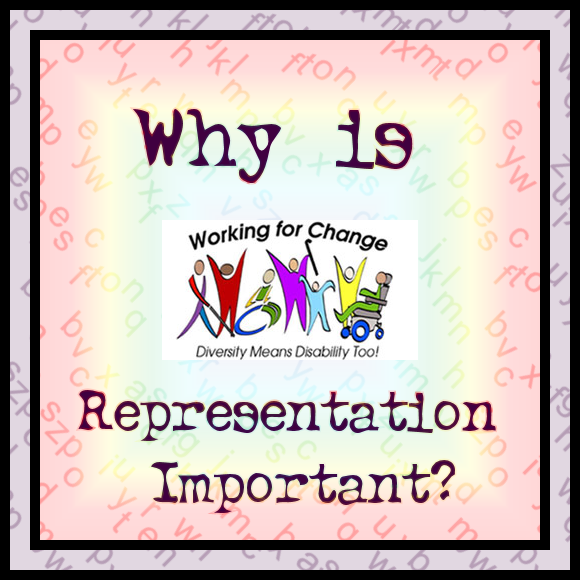 Why is Representation Important?
If I'm only able to achieve one thing with my writing, I would be happy for it to be the opportunity to show people that they can see themselves in my characters. One thing that's important for all forms of media is that they portray everyday people. Whether they are disabled or able bodied; black or white; religious or not; gay, straight, transgendered or bisexual; man, woman or gender-queer; from all different ethnicities. It's important for people of all ages to be able to read, watch and play media that allows them to see themselves in the story. Representation in the media is important for everyone.

There has been a lot of discussion in recent years about how few female characters there are that are anything but white. Of how many disabled people are equally represented in the films they see, the games they play and the books they read. I could go on and list all the minorities in the world who face oppression and erasure from these platforms, but I think you can tell who I'm talking about. As a white, bisexual, disabled female, I have experienced some of that erasure. While I cannot and will not talk for those who are not me, I can say that in general terms, there is a need to be recognised as a person. That means that there is a need for people reading books to be able to see their own struggles and achievements shown in their genre of choice.

I recently wrote a piece on being a disabled writer (found here) and have spoken somewhat about how young disabled adults and children need to see that just because you have a disability, it doesn't mean your life is over and that you will never amount to anything. As a young adult author, it is important to me that I am able to share characters who have disabilities. As a bisexual woman, I need to be able to do the same there as well. Diversity in fiction is not a bad thing. Why should the default character be a white man or woman? A young black teenager should be able to read a book and not have to accept that they will always be a background character, nor should a gender-queer teenager, or a disabled teenager. I'm not saying that all my characters are from minority groups, but I like to think that there is a mixture of them. I know that one of the books I am working on at the moment has people from a whole array of different ethnicities, religions, and sexual orientations. I can't speak for people from ethnic minorities using my own voice, as that is not my story to tell, but that doesn't mean I should ignore their oppression when I write about these characters and so there has been a lot of research involved, including a large amount of discussion with people from minority groups.

I am disabled though, and I do see a minor amount of disabled characters who don't fit a certain stereotype. I can think of three or four of my books that either have a major character who has a disability of some kind and I know that I will continue to write those characters because I feel that it is my duty to show the young disabled people of this generation that there are people like them who achieve greatness and that with a disability, you are not always condemned to living in the background, out of the limelight. I'm not saying all of this to toot my own horn and collect my trophy for making some of my characters deal with disability. I'm saying this because it's high time that the number of main characters in fiction reflect the number of disabled people in real life. The same goes for those who are a part of any other minority.

Representation matters and it's down to people in charge of the flow of media, such as writers, artists, record labels, toy companies, game designers and so on to start realising that it's no longer acceptable to push people from minority groups into the background, to make them 'redshirts', loveless extras, or the butt of jokes. The young people growing up now need to be able to see a character on the screen at the cinema or on the TV or in their favourite book or even simply in magazine adverts and think "that person's just like me!"

It is 2014, the twenty-first century, and racism is still rampant, gay rights are still being fought for, transgendered and gender-queer people are still scared for their lives, are still abused and ignored, and there is still a wage gap between men and woman. Isn't it time we took a step back and thought about all of this? Realised what we are telling the next generation? That unless they are a white, Western man, then they don't matter. Their needs are not important. They don't need role models because they're always going to be "background" characters. Is that really what we should be telling our children? I, for one, don't think so.

So, yes, representation is very important. The internet is full of places to research and opportunities to talk to people from minority groups, and while it is not their job to educate us just because we demand they do, there are still numerous resources to access to be able to write these characters realistically and give the next generation a chance to realise that yes, they are different, but they are not any less important or any less awesome. That's why representation matters to me.

Follow Joey on Facebook or here on her blog to be kept up to date with the latest news regarding Joey and her books.
Posted by Joey Paul at 13:35