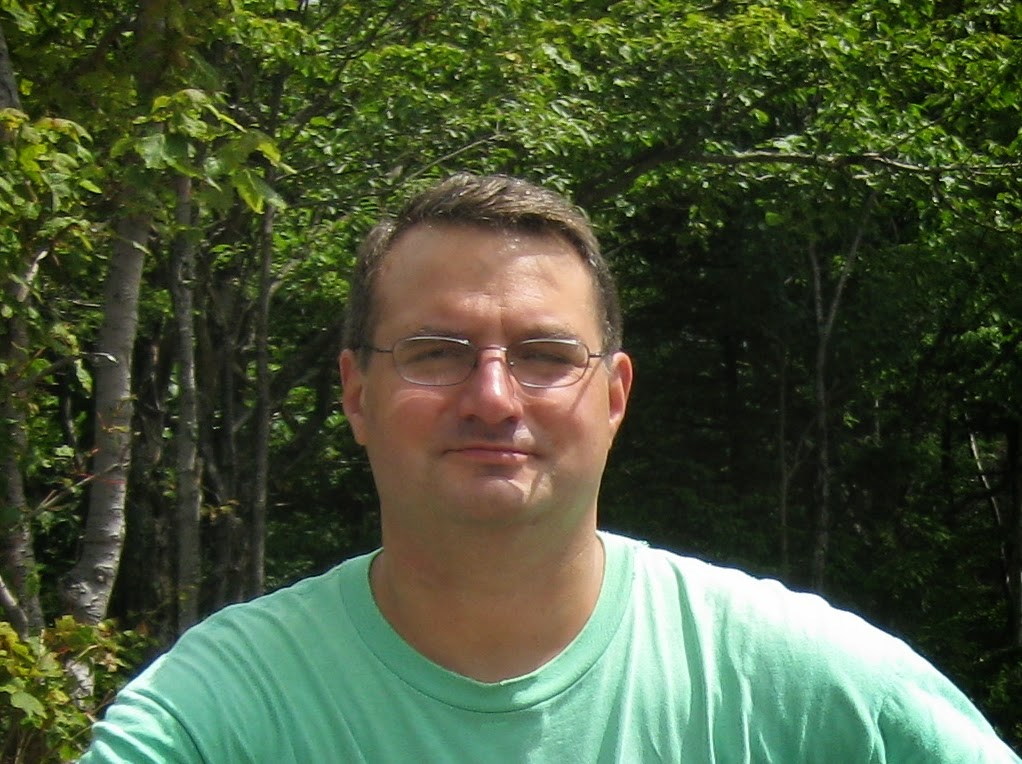 Hi everyone!
I'd like to welcome Armen Pogharian to my blog. He's a young adult author and his books are fantastic! Here's a little bit about him!


Unlike many authors, Armen was not an early reader.  He can honestly say he didn’t voluntarily read a book until he finished The Hobbit in sixth grade.  He earned a BS in Electrical Engineering from Rensselaer Polytechnic Institute, where he was an Honorable-Mention All-American swimmer.  As a USAF officer, he worked on ‘Area 51’ projects – he never saw a single alien (dead or alive).  He later earned an MBA from the University of North Carolina in Chapel Hill and spent more than a decade in the high tech and biotech industries. His stories mix elements of science and history with a healthy dose of fantasy.  When not writing he enjoys swimming, reading, and the outdoors.  He lives in Pittsford, NY with his wife and three children. You can find him on Facebook here or follow his blog for more information.

I've read three of his books and will include my reviews of them, but first he's written a piece on where he gets his ideas from.


As a writer, I’m often asked, where do I get ideas for my stories?  As much as I’d like to lay claim to some form of creative genius, the sad truth is mine is a rather convoluted and muddled path, which reminds me of an old television program.  Back in the 1980s, when US cable TV was still relatively young, hungry for content, and the History channel hadn’t discovered reality programming, my channel surfing helped me discover James Burke’s Connections.  It’s a wonderfully different way of looking at how seemingly unrelated events, technologies, and societal trends impact the modern world.  One episode connects the concept of credit to sending a man to the moon.  Along the way the program examines military tactics, Napoleon, canned food, and refrigeration.  Taking a page from Mr. Burke (admittedly a much smaller page), here’s my attempt at making some interesting connections to some of my own writing.

As a young child the television show Sesame Street (for those outside the states it’s a public television program famous as the original home of the Muppets) had a huge impact on me.  It debuted when I was four and quickly became my first must-see-TV show.  It taught me my ABCs, how to count to ten, and lots of other great stuff.  Besides Oscar the Grouch, who lived in the coolest garbage can, my favourite characters were Ernie and Bert.  Their banter and antics were to pre-schoolers what Laurel & Hardy or Abbott & Costello were for the previous generation of adults.  Like the great vaudeville comedic teams the simple Ernie consistently gets the best of the sceptical Bert, albeit in a very kid-friendly manner.

While the creators say it’s a mere coincidence, there’s a popular rumour that the two were named for the cab driver and policeman from the movie It’s a Wonderful Life.  Even if that’s not true, the two characters have inspired use of their names in other media.  Bert and Ernie Moon from the British show EastEnders were named after the famous Muppets, as were a pair of suspected extra-galactic neutrinos detected by the IceCube Neutrino Observatory at the South Pole.  The observatory’s location and detection mechanism may allow it to provide the first experimental proof of the extra-dimensions predicted by String Theory.

Okay, so what’s the connection?  Misaligned is a contemporary YA fantasy series that began as my attempt to answer the question:  What happens at the intersection of String Theory and the Welsh origins of Arthurian myth?  A wandering mind is often a wondering mind. 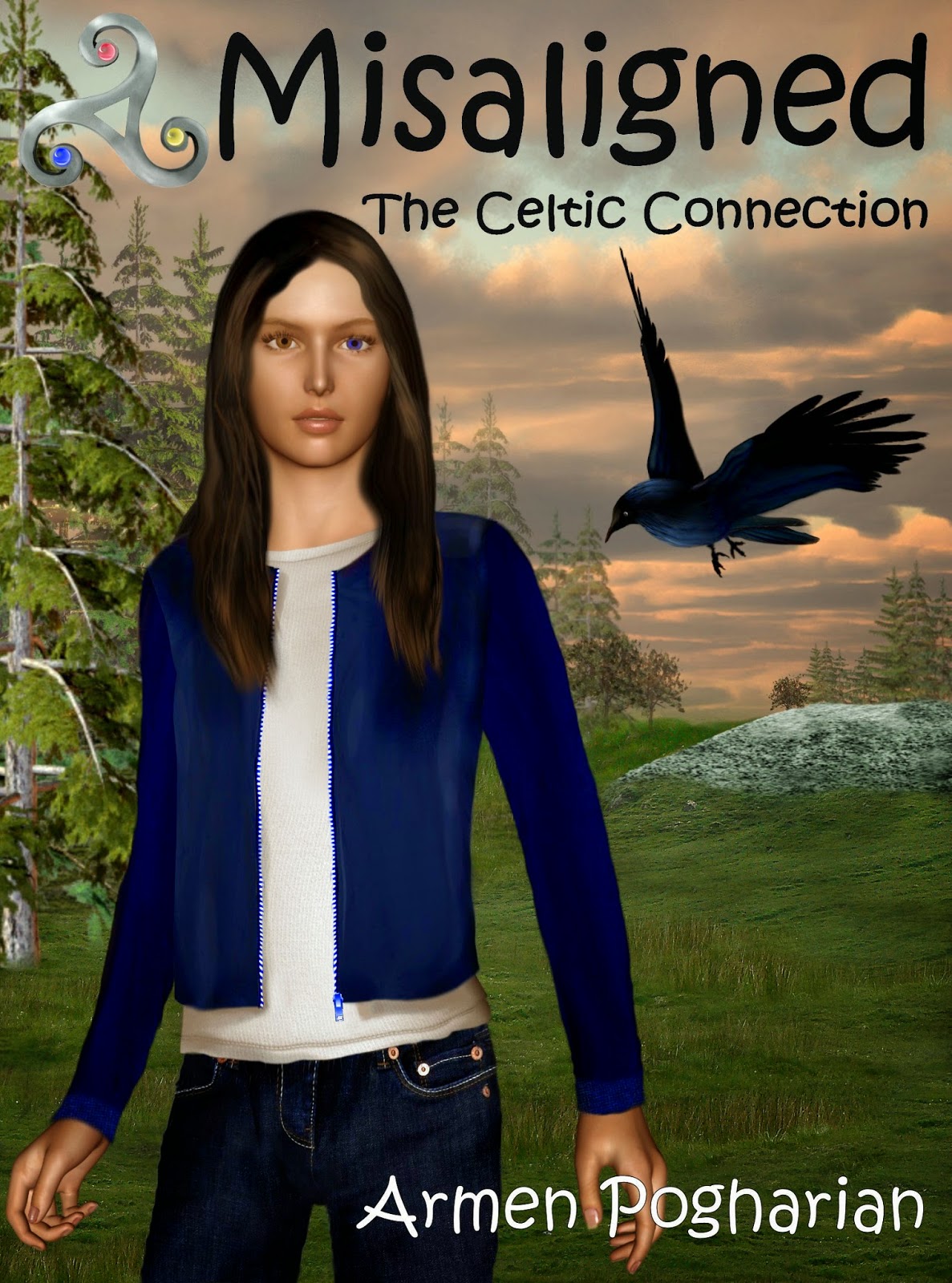 Eighth grader Penny Preston unknowingly creates a trans-dimensional rift, which causes a food fight. Instead of being suspended, she discovers that she exists in more than three dimensions; she is misaligned. In training, she learns that she is the key to preventing higher-dimensional beings from entering our universe with god-like powers. Together with her multi-dimensional cat, Penny struggles to save her relationship with her best friend, protect her universe, and uncover her connection to Celtic myth.

Meet Penny, born with one eye a different colour from the other. She's slowly realising that she's a little different from her peers but before she can explore it fully, she's thrust into life as someone who is misaligned - that is, someone who can see other dimensions and travel between them. The only problem is, there's some power that's desperate to harness what she can do to open their own portal to another dimension. This book is downright AWESOME. I was a little unsure as to whether I'd enjoy it and I'm very pleased to say that I was completely wrong! I found myself reluctant to stop when nighttime came, saying "just one more chapter". When it ended, I was desperate to read more of Penny's adventures and so I've brought the other two in the series which I'll also be reviewing. Armen Pogharian is an excellent writer who knows how to pull you into the story, leave you hanging, desperate for more and keep you reading page after page. I expect great things from the sequels and I am completely sure that I will not be disappointed, nor will you if you give this series a read! HIGHLY recommended! 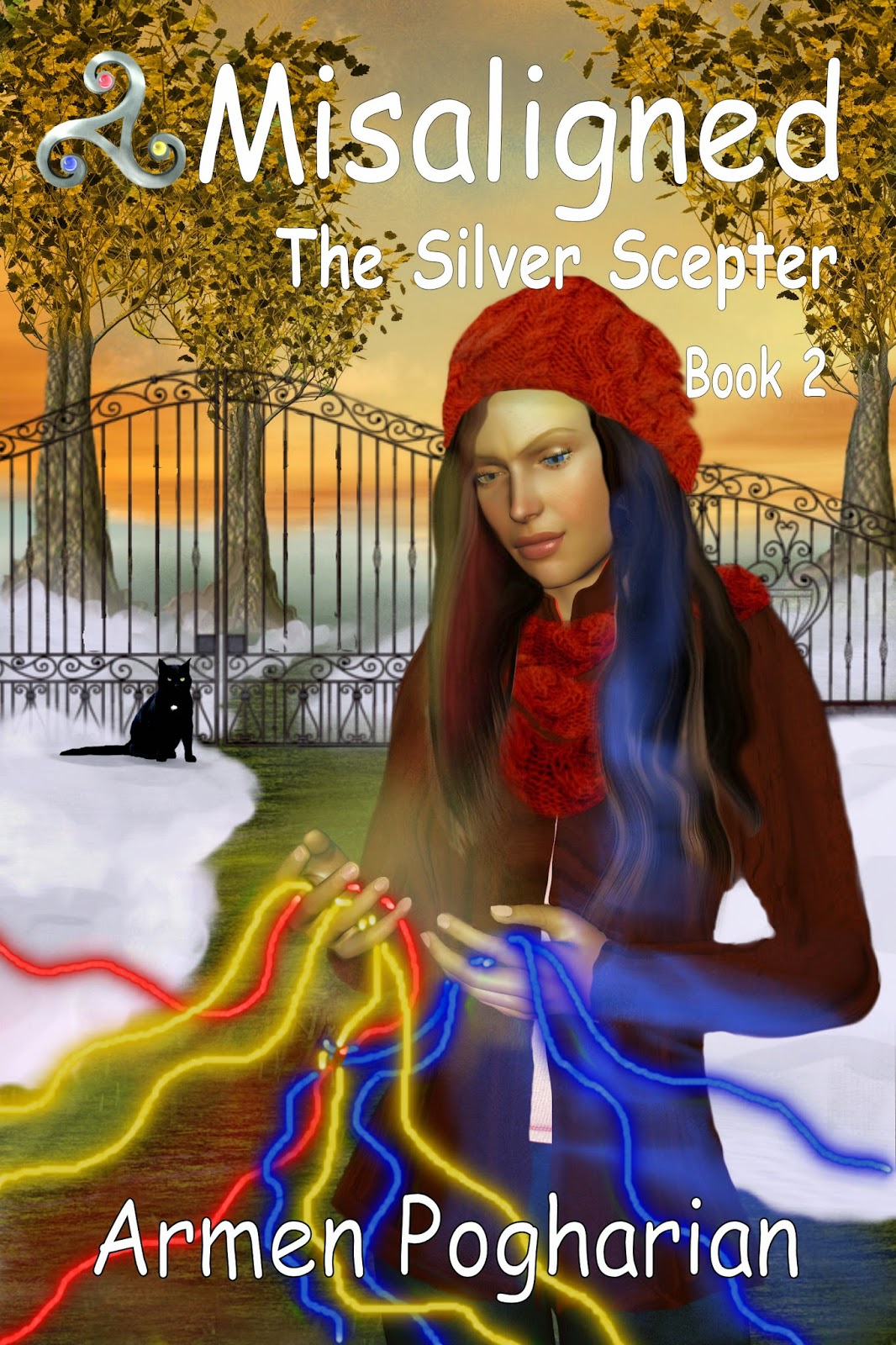 Why is an ancient Celtic spirit plaguing Piper Falls with a rash of pranks and what's it got to do with the discovery of a mythical Seneca scepter? Learn the answers with Penny, her best friend Duncan, her cat Simon, and her two other-worldly teachers as they unravel the mystery of the Silver Scepter.

Having devoured the first book in a few days, I was desperate to read the sequel and managed it in just two days of solid reading at bedtime. Once again, all is not right in Piper Falls and it seems that there is more to the history of the known world than we thought. Penny and Duncan are both working hard to make sure that Penny's status as misaligned is not known to anyone other than the core group. When an artefact is carbon dated as over 6K years old, it seems that there's more at work than first thought. Once again Pogharian has overdone themselves with this book. It's fast paced and I drank it up as if it were my life blood. A cast of new characters fill in the gaps between the lessons from Penny's trainer and Master Poe, and Penny herself finds that she's learning more and more about what being misaligned actually means and what she can do with it. I loved the first book and I adored the sequel. My hope is to move onto the third (and last book so far) today and finish it asap. My only problem is that that will mean I have to wait for Armen to write more, and I have never been that patient when it comes to a series of books that are as gripping as these. Recommended to all those who love mystery without crime and dead bodies, and love the paranormal as well as learning something new about Welsh and Celtic folklore. An excellent read from start to finish and I highly recommend this series to readers young and old! 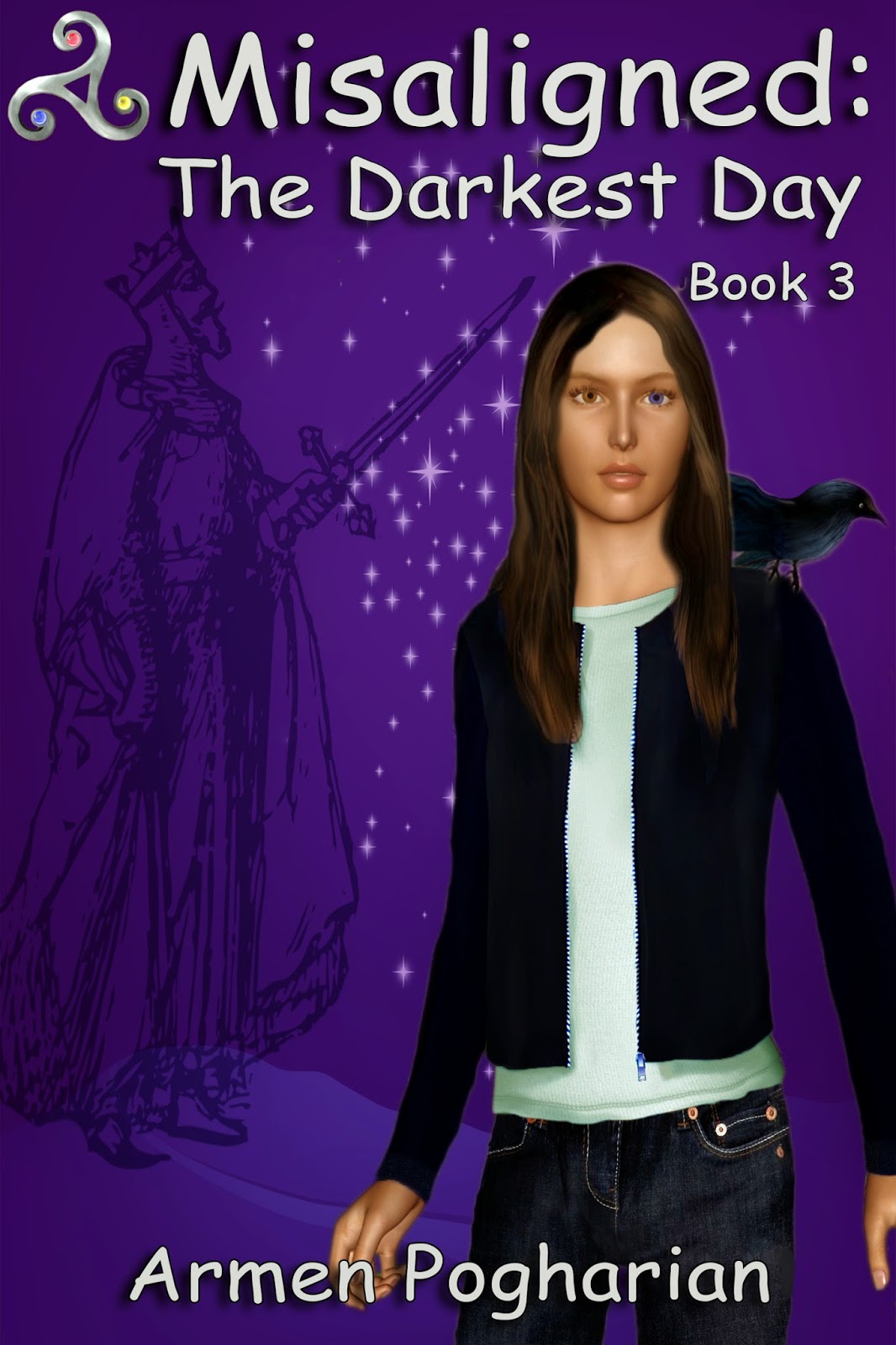 Something is attacking the structure of the multiverse and releasing higher-dimensional energy into Piper Falls, NY. The increased power emboldens the reenergized Bodach to wreak havoc on the small town. It also draws more terrifying entities to the town, including a former Bodach commander seeking to avenge her defeat at the hands of King Arthur, a mysterious shape-shifter known as the Newiddyn, and a destructive Celtic spirit. Penny and her allies must defeat the Bodach, restore the integrity of the dimensional fabrics and prevent the new entities from unleashing the apocalypse of The Darkest Day.

I found myself looking for extra time to read so that I could finish this book. It's the third in the Misaligned series and I feel saddened that now I have to wait for the next one (if there is one) to be written as I have found myself falling in love with this series. It is so excellently written and the past and present are intertwined whilst still remaining believable. Once again Armen Pogharian has written a nail-biting book where you find yourself going back and forth in time to discover the answers to the present day problem. The characters are lovingly crafted with just the right amount of reality intertwined in the fictional world of Piper Falls. I am happy to call myself a fan of this series and can recommend it to those young and old alike. If you have an interest in early Welsh and Celtic history, then this is the series for you! Highly recommended and I will be counting down the days to the next book!

If you are interested in doing a guest blog with Joey, you can contact her on this email: bugbooks@virginmedia.com