Review of The First Time I Fell by Jo MacGregor 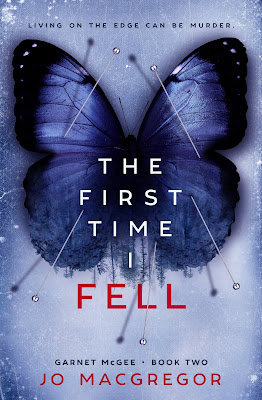 Living on the edge can be murder.


Garnet McGee returns to her small Vermont hometown, all set to finish her master’s thesis in psychology, and convinced that the paranormal experiences of recent months are now behind her.

Then she stumbles across a body in the strangest of places, and starts getting unsettling visions of the woman’s life and death. Local police assume it was suicide, but Garnet is sure it was murder.

Egged on by her eccentric mother, Garnet starts investigating. Police Chief Ryan Jackson is intrigued by the “readings” she gets about the case, but others are determined to stop her amateur sleuthing. Meanwhile some inexplicably strange things are happening at home.

Garnet is determined to find out who killed the beautiful woman loved by so many, but that will mean taking the leap into trusting not only others, but also her own growing psychic abilities. Yet every vision puts her in greater danger. As she gets close to discovering the truth, Garnet realizes that the killer will do whatever it takes to keep the truth hidden.

Even if that means killing again.
Amazon
My Review:5 stars
I read the first in the series and adored it, so when this one came out, I had to have it. Garnet is back in her small hometown, and she's determined to finish her thesis and not get involved in anything spooky, despite what her mother says! The book was highly engaging, beautifully written and I adored the dynamic between the characters. Garnet's way of thinking was refreshing but also interesting to see how she coped with the changes but also bring her analytical and logical mind around it it. I very much adored the book and will keep reading this series. Highly recommended!

Join Joey here on the blog on Fridays for interviews, reviews and guest bloggers. If you'd be interested in doing any of those, you can contact Joey here.
Posted by Joey Paul at 07:37