Making Your Ideas Work: When You Start Off Too Big - The Creative Process 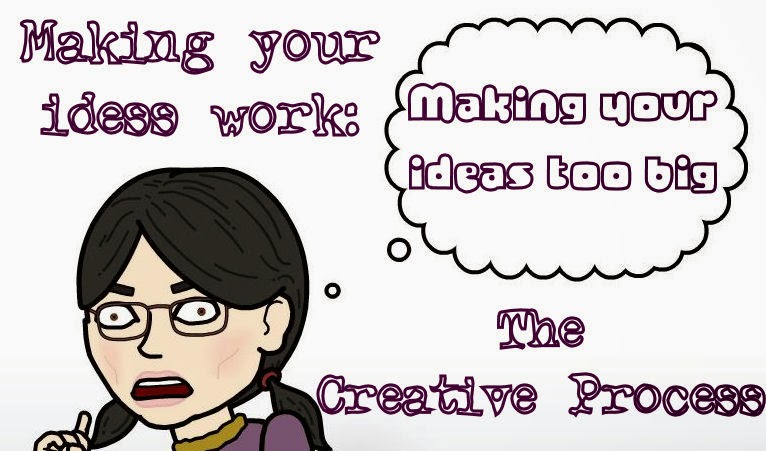 Making Your Ideas Work: When You Start Off Too Big

The key to any good project is how you start preparing. Personally, I'm a planner, I always have been in regards to my writing (a piece about which can be found here) and I don't think I'll ever stop planning. At least, not unless I find another way that doesn't involve so much micromanaging and still works. However, there are times when you'll have an idea, you'll wrestle it to the ground and you'll start trying to fit it into the box you'd picked out specially for it. And that's when you realise, it's too big. I don't mean that the box is slightly overflowing and you'll have to sit on it to get the lid to close, I mean it's WAY too big. The box has practically collapsed from the sheer enormity of it. The sides are almost on the floor and there's no way it's gonna fit.


So, what do you do? If you're like me and you take your time to build your ideas and you plan and map out each chapter, you'll have hopefully realised that your idea was too big before you'd invested hours of painstaking writing into trying to make it fit into the plot. If not, then that's when you have a problem, because while the indie world doesn't have  many rules regarding word count, there does still come a point where you have to say "it's too much". The kind of idea I'm talking about is the kind that meets those rules, and snaps them in half. Either way, whichever kind of writer you are, you're going to have some serious issues if you don't do something about the idea, because if you want it to end up as a book, you'll need to find a way to either scale it down or draw it out. I'll discuss both of those in more detail.

Whenever you write the first draft, you're aware that some things that get written won't make it into the final copy. The same can be said for ideas. Do you need every little thing you've thought of to make it into the actual book, or will leaving out a few bits and pieces here and there allow you to parse down the word count, but keep the story just as awesome? Only you really can answer this, because it's your idea. Think of it this way, if you've ever read a book that then got turned into a movie, you'll have noticed that some of the scenes in the book didn't make it into the 90+ minutes of the movie. Sometimes you'll think that a certain scene WAS needed because it helped to explain something else that WAS included, but you get the general idea. While it's completely fine to write a seven hundred page novel (and I've read a couple of really good ones where anything left out would have ruined the book in my opinion), you have to realise that for some critics and reviewers, there'll be some scenes that they see as completely unnecessary and filler that should have been cut.

That's the hard thing about writing an idea. Even if you're really good at capturing the idea and describing it in beautiful technicolour through words, some people are always going to see parts of it that weren't needed and since you're the one who wrote it, it may seem that they are missing the point. However, most writers need an outside perspective to decide whether a certain scene is critical, and that's why we have editors. I know that for me, I've written a killer scene (both literally and figuratively) and then been told by my editor that for the sake of the rest of the book, it has to go, and they're right. If your idea is too big to be told in one go, you have another option that I'll come to in a moment, but if you choose to do it in one huge book, be prepared to lose some scenes that you may love. This is good advice no matter how big your idea is: not everything you write will make it to the final draft and that's often for the best.

Now the other option for this situation is to see if the idea will grow more, so that you can make it into a series. There are numerous popular trilogies out right now and they all started out as an idea, possibly one that was just too huge to fit into one 70K word novel. If your idea is big enough to span a few books, then go for it and be happy that you didn't set the idea aside for something smaller. However, I do have a few pieces of advice.

Generally speaking, when someone buys the first book in a series, they are expecting an over-reaching story arc - i.e the big idea, as well as a smaller story arc that spans the book - i.e something that introduces the story and then resolves and/or leads to the next in the series. If you have enough of an idea to span three books, but can't break it into a smaller arc for each one, you may find yourself with some unhappy readers. People generally want there to be a reason for the split in the books rather than being told "it was too long for one" because that makes them feel like they have been charged for two books but only one story. I'm not saying that it can't be done that way, just that I would warn against it. As with the long novel, I have read and loved series that don't have mini arcs, and when done well they can be excellent to read, you just have to be careful how you construct your words.

So, those are the two options for when your idea is too big, but what happens though when your idea is a bit too small and needs to be plumper before it can fit across fifty thousand words? I'll be writing a piece about that soon. Remember though, your mileage may, of course, vary, everyone is different and every idea unique.

Follow Joey on Facebook or here on her blog to be kept up to date with the latest news regarding Joey and her books.
Posted by Joey Paul at 11:14