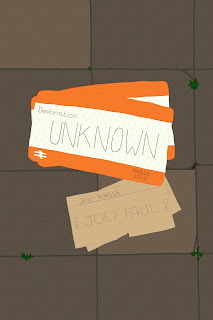 I got the idea for Destination: Unknown when I moved into the house I currently live in in August 2009. It is in an historic part of the town I live, and the area is it's own little village. Given that our house had been standing since 1840, I became a little curious with finding out who had lived here previously. As I dug into old census reports and other stories, I got the idea that if a character were to live here and be able to go back 100 years via some part of the house, then they could meet the person living here. I threw in a crime twist and the idea was born.

I already had a clear plan for the character living in 2010. She would be a young carer for her disabled mother. A bit of a loner, but having been burnt by people calling themselves her friends in the past, she didn't mind it all that much. Harriet would be fifteen, happy at school and happy at home. She would carry burdens that most fifteen-year-olds are lucky not to know, but she wouldn't be bitter or upset about it. Yes, she wanted her mother well, but at the same time, she didn't blame her, or feel she was held back. Their bond was strong, Harriet's father having abandoned the family before she was born, and in her eyes, she was doing what her mother would do for her.

Enter Dot, full name Dorothy. She lived in the same house, but in the year 1910. Her father was accused of murder and looked to be hanged for the crime. With her large family facing the workhouse, she looks for any way to prove her father did not kill his foreman. She appears to Harriet as a ghost one evening, and then the next day, as Harriet is looking out the kitchen window, a paving stone in her garden lights up. Harriet goes to explore and finds herself being sent back one hundred years into the past. She meets Dorothy face-to-face, with only enough time for Dot to plead for her help before Harriet is sent back to 2010.

The whole story flits between the present day and 1910, as Harriet gets to know Dot and her family and promises to help. The only problem is that time moves faster in 1910, where one visit a day apart is actually weeks, and time is running out for Dot and her family. Can Harriet save the day and rewrite history?

It was a joy to write, and I loved the way it crafted onto the page. I had a great time researching both my own house and the former occupants, to imagining how it would've looked in 1910. I was, at the time, working towards my degree and so snippets were written here and there. Time stolen away to look into 1910 and see where the story was going, and for once, I didn't actually have a clear idea of how it would end. When I finished it, I put it away for a few years and when I started the editing process, I was actually finding myself very immersed in the story. One of the few times I've been eager to get the editing done because I really did love writing, reading and editing it!

Be sure to grab yourself a copy either in paperback here, or in Kindle here.

Follow Joey on Facebook, Tumblr, Twitter, or here on her blog to be kept up to date with all the latest news regarding Joey and her books.