Interview with Michael Beaulieu and review of The Book Of Shadows: Casting 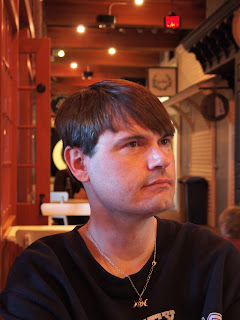 I am delighted to welcome Michael Beaulieu to the blog today for both an interview and a review of his book - The Book Of Shadows: Casting. Here's a little bit about Michael.

Veteran entertainment journalist and Love is Pop owner Michael Beaulieu’s first novel Reckoning Daze was #1 on Amazon’s best-selling satire chart. Like the book’s protagonist, it was written when Michael was an anorexic living in Los Angeles himself. More recently, Michael published the first volume of his young adult, urban fantasy series Book of Shadows. It’s the story of three 16-year-old girls who form a coven after finding the lead character’s late great grandmother’s spell book, also known as a book of shadows. Michael again drew from personal experience in writing Book of Shadows, being that he’s a Wiccan residing in the book’s Massachusetts setting like his characters. Unlike most fantasy books, the spells in Book of Shadows are all inspired by modern day witchcraft, making the book that much more believable. Currently, Michael is polishing Book of Shadows: Volume Two. If you’d like to be among the first to hear about it, or Michael’s other projects, head over to his website and subscribe to his newsletter. www.michaelbeaulieu.com

And onto the interview!
Q: What made you want to be a writer?
A: I started writing stories when I was very young.  I'd read my children's books and wonder what if would be like if characters from two different books met each other and things like that.  So, you could say I started off writing fan fiction when I was maybe 7 years old.  I had more fun with that than playing outside with the other kids.  I remember writing a mystery novel called 3: The Kill when I was ten. (I don't remember anything else about it though.)  It's just always been what I wanted to do ever since.  To tell stories to entertain myself, first and foremost, and then hopefully other people will enjoy them, too.

Q: What kind of writer are you: plan or not?
A: I usually have an idea of what the end is going to be when I start off, but I am definitely not a planner who sits down and writes detailed outlines before I start writing.  I toss around ideas as I write in my journal and then some of them get used and others don't.  The thing with me is, if I know too much about the story already then it isn't as interesting or fun for me to write it.  Plus, I like to let the characters take the story where they want it to go.  It makes it fun.

Q: How does your average writing time go?
A:  I usually get up around eight.  I take a shower, get dressed, make an iced latte.  Then I sit down at my desk and I stay there until 4PM.  Most of the time is spent writing my books, but I also own the pop culture website Love is Pop (www.loveispop.com) and often have interview questions to write for that.  But if I'm being entirely honest, the first couple of hours I'm sitting at my computer every day are usually spent sifting through e-mails and dealing with the business side of self-publishing.

Q: If you had the chance to write anywhere, where would you choose?
A:  Of all the places I've been, Paris, France is my favorite and I dream of living there someday.  I would love to sit in little indie cafes in Paris writing all day.

Q: Do you prefer to type or hand write?
A: When I'm writing actual pages of a book, I'm typing it on my computer.  I can type fast and I love the act of typing.  But when I'm writing down ideas and trying to figure things out I do that in my notebooks.  I do occasionally write scenes in the notebooks though, but they're typed up as soon as they're written.  I don't write entire chapters by hand, mostly just notes.

Q: What attracted you to your chosen genre?
A:  Currently, I'm writing an urban fantasy, young adult series called Book of Shadows, which is about a trio of teenage witches and their friends.  I wanted to write urban fantasy because I'm a witch myself and usually the witchcraft in fantasy is 100 percent fantasy/supernatural.  With my books, the spells are based on real witchcraft spells.  Also, my great grandmother was said to be a witch and had prayers to heal burns and things, which I believe were spells, so maybe it runs in the family.

Q: Would you ever like to branch out to a different genre?
A: Definitely.  My first book, Reckoning Daze, which I published a couple of months before the first Book of Shadows, is a dark satire about an actress and it's more of what they call a new adult book than young adult.  That one is definitely for people over 18.  I also have a memoir written about when I lived in Los Angeles called Fear & Self-Loathing in Los Angeles.  I plan to write another memoir – about my adventures in Paris – at some point, too.  And once I'm done writing Book of Shadows 3 I'll probably write something brand new that will be more like what they call literary fiction. 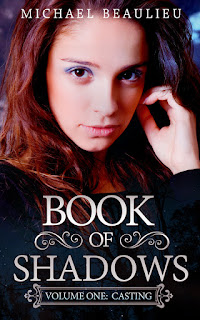 What would you do if you found your late grandmother’s book of shadows – a witch’s spell book and journal – and learned that you’re a natural born witch? You’d try one of the spells, of course! And that’s exactly what 16-year-old Emma McGlinchey does. To her amazement, the candle lighting spell she picks actually works.

Naturally, Emma has to recruit best friends Lia and Shar into starting a coven.

Soon the girls cast a spell to make everyone like them at the religious high school they’re being forced to attend for the first time. Unfortunately, it fails to make an impression on a group of zealots who set about bullying Lia and Shar for being an openly lesbian couple.

Meanwhile, a love spell they cast for Emma gets the boy of her dreams to ask her out, but the school guidance counselor comes onto her, too. The girls attempt to deal with these problems using other spells, but will they be able to set things right before something catastrophic ensues?
Amazon

My review: 5 stars
I loved this book! From the first page I could tell that I was going to like the protagonist. Emma discovers her grandmother was not only a witch, but has passed the power onto her. Having had premonitions a lot in her life, things are suddenly starting to make a lot of sense! With her new found knowledge, Emma turns to Lia and Shar and asks to form a coven with them. And then the girls get busy with their new power! The book had so many twists and turns that it was almost impossible to see what came next and dealt with the highs and lows of first love, and teenagehood. It was very well done and I did not see the end coming. Will be checking out the next in the series when it comes out! Recommended!