Interview with Madeline Dyer & Review of A Dangerous Game 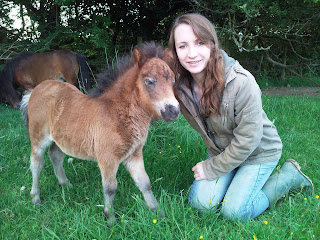 I am delighted to be joined by Madeline Dyer today on the blog for an interview and my review of her book - Untamed. Here's a little about Madeline.

MADELINE DYER lives on a farm in the southwest of England, where she hangs out with her Shetland ponies and writes young adult books—sometimes, at the same time. She holds a BA Honors degree in English from the University of Exeter, and several presses have published her fiction. Madeline has a strong love for anything dystopian, ghostly, or paranormal, and she can frequently be found exploring wild places. At least one notebook is known to follow her wherever she goes. Her debut novel, Untamed (first published by Prizm Books in 2015), examines a world in which anyone who has negative emotions is hunted down, and a culture where addiction is encouraged. Her second novel, Fragmented, released in September 2016 was followed by Divided in July 2017. She is represented by Nikki Terpilowski at Holloway Literary.

How long have you been writing?
It sounds a little clichéd, but I’ve been writing for as long as I can remember. I remember one day at school, when I was about eight or nine, we had to write a ‘book’. We were given one hour to write it and one hour to type it up in, and I was so excited. But, when I began typing mine up, I started changing bits and adding new pages as I thought of new things that would make it more exciting than the version I’d written in the previous hour. My teacher wasn’t too impressed as it meant I never finished typing my story up in the allotted hour, but I was happier with the result!

I’ve been writing professionally for the last six years.

Do you write in the genre you love to read?
Absolutely!

Do you have any favourite authors to read?
Yes! Paula Hawkins, Holly Bourne, Jean M. Auel, Richelle Mead, and J.V. Jones are all favourites!

Are you an organised writer or not?
Ha, it depends! With some manuscripts, I’m really organised and do loads of research and neatly colour-code it all in folders. Other manuscripts? Not so much! It really depends on the type of story I’m writing.

In general though, I do try to be really organised as it certainly helps me later (and I have lost/misplaced several chapters before due to not being organised!).

Do you like editing or is it something you loathe?
I really love editing! For me, the first draft is just about getting the words down on the page and beginning to know who the characters are and what the story is. But the subsequent drafts and all the editorial stages are really where I understand my characters and the shape of my story.

It’s very rewarding to take a messy first draft and edit it into something that’s cohesive and makes sense.

How would you describe your writing process?
In general, I write my first drafts very quickly! This tends to be because when I’m drafting I really immerse myself in the book’s world and almost everything revolves around it… So, I typically write a 100,000 word first draft of a manuscript in 1-2 months.

After that, I let it rest for 2-4 months (in which I’m either editing a previous first draft or writing something new). When I go back to the manuscript, the first thing I do is read through the whole thing and note down the things that do and don’t work, and any ideas I have for huge revisions. And then it’s time to tackle the editing.

I start with the bigger stuff first—things like changing a character’s motivation or their goal, cutting out whole chunks of the plot and writing new chapters, checking that the ‘shape’ of the plot works, examining other characters’ motives and how they impact on the main character. That sort of thing. (As well as doing thorough characterization work.) This typically takes me around 3-4 months.

Once I’m happy with the shape of the manuscript, I then look more closely at the pacing and tension levels of different scenes and work on those areas, doing a really detailed edit. After this, I do a quick edit for imagery and the quality of the writing, before sending the manuscript off to my critique partners and beta-readers. Such a valuable step! Once they’ve had a chance to read the manuscript and have provided me with feedback, I do another big revision based on their thoughts and any areas they identify as problematic.

Sometimes I’ll use two or more rounds of beta-readers, but usually by this stage I’m pretty happy with the manuscript as a whole, and then I do a grammar edit myself. (But this won’t be the published version, as I’ll still work with in-house editors and my agent if it’s one of my manuscripts for the traditional publication route, or if it’s one of my indie releases then I’ll hire an editor for developmental, line, and copy edits).

Do you prefer ebooks or paperbacks? Why?
Definitely paperbacks! There’s just something about holding a book in your hands…

How do you plan a book launch?
What a great question!

So, for my most recent book, A Dangerous Game, I drew up a launch plan schedule (starting two months before the release), detailing the dates I’d be sending ARCs out to reviewers, revealing the cover, the back cover copy, and an excerpt. I then set about scheduling interviews, newsletter mentions, and blog posts for the week around the release and talked to my ARC team about any ideas they had for drumming up book buzz.

Giveaways are a big one for creating buzz about a release, so I also scheduled a Goodreads giveaway and ordered a few pieces of promotional swag pieces to giveaway during the release.

How often do you write? Do you have a schedule?
I write/edit/plan every day! I’ve found I do my best writing early in the morning, so I typically start writing as soon as I get up and continue for as long as I can. Afternoons tend to be for doing the admin (such as planning releases, marketing efforts, answering interviews) and interacting with readers. 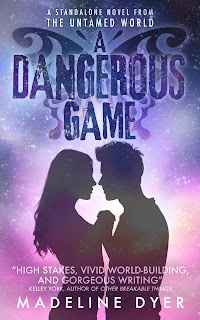 LOVE WAS NEVER SUPPOSED TO BE EASY.

All her life, Keelie Lin-Sykes has known what she wants: to protect her brother and sisters by killing as many of the soulless Enhanced Ones as she can. Oh, and to have fun while she's doing it. After all, hiding in a secret Untamed community, while the group's Seer warns them of danger, shouldn't mean that life can only be serious, right?

But, when a face from her past suddenly--and secretly--shows up, Keelie's catapulted back into the very world she's been trying to escape from for the last ten years: a world full of guilt, lies, and...love. And the deeper Keelie gets into this world, the bigger the risks become.

Now, Keelie must deceive those she values most in order to protect them, even though her actions will destroy everything she knows and haunt her family forever. But she can't ignore her feelings--not again. And Keelie will do anything to be with the man she loves.
Amazon

My review: 5 stars
I have read all the others in this series, and was excited to pick this one up. Set before the first book, it was an interesting point of view, and I instantly fell in love with the characters. I was caught up in the intrigue and mystery of what was going on. I loved Keelie, and I loved watching her fight for what she thought was right, even when everyone else around her was saying different. The blows kept coming and she kept getting up and moving on. Amazing book, and really really enjoyed it!


Join Joey here on the blog on Fridays for interviews, reviews and guest bloggers. If you'd be interested in doing any of those, you can contact Joey here