Review of Aletheia by Megan Tennant 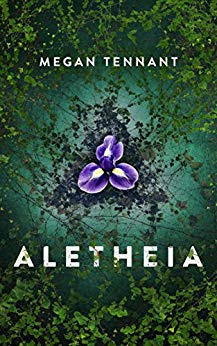 Nearly two decades after the fall, the transcendent city of Iris is the only place rumored to have a cure to the disease that decimated the world. Beyond Iris, are the remnants of the old world, crawling with the Depraved. Infected with Lethe, they no longer remember the people or dreams they were once willing to fight for, and are left instead with familiar voices that whisper dark and unfamiliar words within their minds. Instinct is all that keeps the diseased struggling to exist another day.

Deep underground, below Iris, exists a compound, prison to the Nameless who traded their freedom for the cure to Lethe. It is here that 736 fights to protect those she loves. Not against the Depraved that she's taught to fear, but against the society that saved her from that fate. She was willing to trade away her rights to regain the ability to form memories, but she won't let the cult that cured her treat the lives of the Nameless like a resource to be used and discarded. At least, not without a fight.

How much is 736 willing to sacrifice for revenge against her captors? For those she cares about? For freedom? Everything has a cost, what would you be willing to pay?
Amazon

My Review: 5 stars
I'd heard about this book all over and I was intrigued by the blurb so picked it up. It starts right in the middle of the action and I was pulled it. It was an amazing story, beautifully told, with a balance between the fearful and the hope of a future. 736 was an amazing lead and I loved being inside her head as she learned all she did, grew as a character and became what she was. I was blown away by just how good the book is, and would highly recommend it to anyone who loves a good dystopian. Especially given the healthy love story that litters through the pages! Overall would give it more than 5 stars if I could!

Join Joey here on the blog on Fridays for interviews, reviews and guest bloggers. If you'd be interested in doing any of those, you can contact Joey here.
Posted by Joey Paul at 08:23