Interview with Savy Leiser & reveiw of Sculpt Yourself 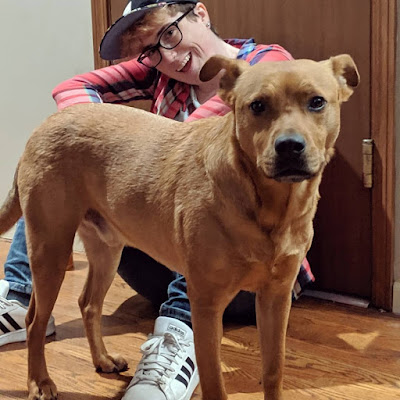 I'm delighted to welcome Savy Leiser to the blog today for an interview and my review of her book - Sculpt Yourself - here's a little about Savy:

SAVY is a Chicago author, journalist, filmmaker, and small business owner. She's the founder of the Furever Home Friends, a series of children's books and stuffed animals based on real rescue dogs, which was named one of 2018's Top 4 Most Purposeful Startups in Chicago. She's also the author of Sculpt Yourself, a new-adult ownvoices LGBTQ+ speculative novel. SAVY first started making book trailers to advertise her own Furever Home Friends books and products, and then branched into becoming a full-on booktuber and authortuber over at the YouTube channel SAVY Writes Books. SAVY enjoys dressing like it's still the early 90s and talking to her dog like he's a human child. When she's not acting obnoxious on YouTube, she works as a music journalist and kids' creative writing teacher, and spends her spare time getting into petty arguments about Star Trek fan theories on Twitter.

In your own writing, which character of yours do you relate to most?
In Sculpt Yourself, I'd say I relate to each of the three main characters in a different way. I'm a lot like Amber because I'm loud, I love putting various sauces on my nachos, and I'm an obnoxious feminist who still loves listening to Eminem. I'm like Kelly because I love art and drawing, I do my work around my pets, and because people sometimes think I'm cooler than I actually am. Finally, I relate to Judie because I'm extroverted, I drink too much (coffee and alcohol), and I hate my body.

Do you read your own genre? Is it a favourite?
YES! I write in contemporary YA, some soft sci-fi, and children's picture books. And I love to read all of those as well!

If you had to describe your style in three words, what would they be?
That 90s Bitch.

What was the first story you ever told?
When I was four, my dog, Sam, ate a candy cane that was attached to someone's present under the Christmas tree. I thought it was so funny that I wrote a story about it and stuck it in a binder. I love having that memory because now the majority of my career is writing books about dogs-- and in one of my Furever Home Friends books, Sam makes an appearance!

Was writing always your dream choice of career?
Yes, from the very beginning. I bounced around a bit in terms of what kind of writing I'd do specifically. For most of my late teens and early 20s, I was working hard toward becoming a screenwriter. So far, though, I've found that independent films have a bigger financial barrier to entry than independent books. So I've put that goal on hold for a bit, but I'm hoping to come back to it once I'm more established.

Do you have a writing space? Pictures or descriptions!
I have a home office where I run all operations for the Furever Home Friends. It consists of two rooms: a spare bedroom that I turned into an office with my desktop computer setup (that's also where I film my authortube videos) and an adjacent dining room where I store all my book and stuffed animal stock and package up orders. In terms of where I do my writing itself, that's everywhere. I write in my office, but I also write on the couch, in my bed, on the toilet, on the bus/train, everywhere. In coffee shops, at McDonald's, on the floors of public bathrooms (well, I did that one more when I was a "quirky" teenager).

Playlists? Yes or no? And why?
Yes! Especially in my upcoming YA novel, One Final Vinyl (which will be releasing May 15, 2020!), music is a major influence in my work. I think that's because I played music for so many years. I work as a music journalist on top of writing my books, so music has remained a huge part of my life. To me, it's natural to figure out characters' emotions and bring them to life through music.

Which social media do you see as a must for writers?
Twitter! I love Twitter, even though it's a dumpster fire. I'm not sure if YouTube is a must, but I've found an amazing community there.

Where do you hang out most online?
Definitely YouTube. I love AuthorTube and BookTube, and I love making videos. Find me on the channel SAVY Writes Books!

Do you have a favourite app for writing?
Google Docs. It's helpful because I can access my writing on my desktop computer or on my phone, which is useful when I'm on the move so much.

Organised or not?
I'd say my life is organized, but my physical space is not. I'm known for eating junk food and leaving trash all throughout my office and living room. I also used to have a major hoarding problem, which I've only begun to address in recent years. It's getting a lot better. But in terms of my goals, project timelines, and to-do lists, I'm VERY organized. I use a five-year planner to break down my goals year by year and month by month. Then I use Google Calendar to break down my weekly goals and obligations. Finally, I make daily to-do lists. I'm very productive, and my time management skills are a major point of pride for me. So I guess I'd say, YES, I'm organized, even though I don't look like it from the outside!

Morning or evening writer?
Both -- just NOT an afternoon writer! 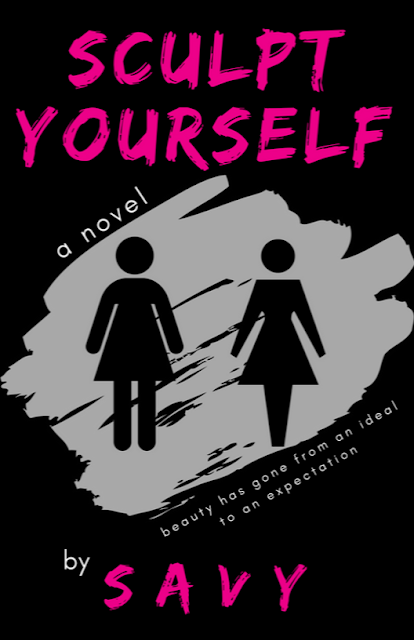 Lipamorph is a drug that lets you sculpt yourself. It's how so many female celebrities in the mid-2010s remained so thin while having such large butts. It loosens up the fat in your body, allowing you to choose your proportions. And it's just been legalized for sale in Chicago.

Amber is a 24-year-old tech support worker by day, gay feminist blogger (and bad-sitcom aficionado) by night. She's been vocal about her disapproval of Lipamorph from the beginning, seeing it as another tool to reinforce patriarchal beauty standards; but as Lipamorph becomes more common, Amber's dissenting voice starts to matter less and less.

Judie is Amber's younger sister, and seemingly her complete opposite; she loves pop music, pretty latte art, and dating men. After struggling with hating her body for most of her life, Judie has become borderline reliant on Lipamorph for self-confidence, much to Amber's dismay.

Kelly is an artist currently working for the marketing firm on the floor above Amber's office. She's whip-smart, proudly bisexual, and strikingly beautiful ... and she's the woman Amber's fallen in love with.

Told from these three women's points of view, Sculpt Yourself tackles body image, LGBT+ topics, and what it means to be a feminist in the 21st century.
Amazon

My Review: 5 STARS
I picked this up having heard good things, and I was not disappointed. Told from three different points of view, the author has a way of making you feel like you're watching it play out in front of you while also keeping you invested in the story. I read it all n one sitting and adored the writing style. Amber was just how I imagined a lot of people her age are facing the situations she is, and having the additional POV of Judie and Kelly just added to the enjoyment. I adored the book,. the growth of the characters and everything else that went into it. Overall an amazing read and one that I highly recommend!

Join Joey here on the blog on Fridays for interviews, reviews and guest bloggers. If you'd be interested in doing any of those, you can contact Joey here.
Posted by Joey Paul at 07:13