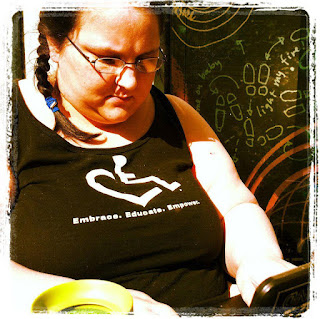 Once again, Joey is answering questions sent to her by readers. You still have a chance to ask Joey a question, as the end date for this batch is the 31st August 2012. If you have a question, send it to JoeyBug44@gmail.com before the date and she'll try to answer in a new post!


-> Describe an average working day for you
I don't work a conventional day. I don't do nine to five, five days a week and then take the weekend off. Due to my health being up and down, I'll work when I can. Sometimes that's every day with a day off or two scattered through the week and sometimes it's an hour or so every few days. I've never been able to do a solid "write for two hours; break; write for three hours; break; write for two hours; end of work day" pattern for my days. It really does depend on how I feel, how the books are flowing and a lot of variables like that. I do try to manage two chapters of each book a week, but sometimes that doesn't happen either. Take this week, I've not managed a whole chapter yet and it's a Thursday! Other weeks I'd be onto my third or fourth chapter by now, it really does vary!

-> Will your books ever be available from other ebook stores? Or in paperback?
Right now, the answer is no, but I am working hard to do what I need to get the books in the iBookStore and that's my next goal. As far as getting them into paperback, that may happen in the future, but for now, it's just Kindle. They may start to appear in other ebook stores soon, but because of the agreement I have with Amazon, I have to sell them exclusively with them for at least six months, which will obviously delay their arrival in other book stores, no matter what format they're in.

-> How did you know your books were good enough to publish?
I'm very critical of my own work, so to be honest I didn't know they were good enough to publish. I started out by printing my own copies and binding them and selling those. The people who read them gave very good feedback and told me that I should pursue publication. I'd also approached some main stream publishers and didn't always get the standard "Your work is great but..." rejection letter. I had a few hand written notes saying that if they could, they would take my work but because of my lack of an agent, they were unable to. That made me more determined to actually publish my work.

-> I'm an aspiring writer, and wondered how easy it is to get your work noticed?
I would say that the first thing you need is a good first reader. Someone who you trust enough that they will give you an honest opinion about your work and any edits that need to be made. From there, you'll probably do better finding an agent. There is a Writer's Handbook published every year, available from places like Amazon, that details EVERY agent there is world wide. Among other information, it'll list the genre they specialise in. An agent should be able to tell you whether they feel your work has merit and then it will be their job to find you a publisher on your behalf. They will take a percentage of the profits and will also help you make sure you pay the right level of tax.

-> How do you make sure that your continuity is correct in a series like "Dying Thoughts"?
I'm a planner, always have been and when it comes to my books, I plan methodically. I have chapter lists, character notes, notes of what day it is in each chapter. My advice to anyone writing ANY kind of book - series or standalone, is to plan, A LOT! It's easy enough to note down something the first time you write it, and then you don't have to worry later on about it when you mention that small piece of info again and get it wrong.

And that's all the questions from the first batch. There are more to answer and if you wish to ask a question, email Joey and she'll try to answer it in the next post. Remember the deadline is August 31st 2012!
Posted by Joey Paul at 12:22