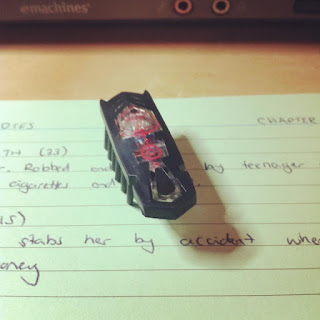 
It seems to be the case that some writers have what they call 'muses'. Sometimes they are things - objects, places, music etc. Sometimes they are a person - lover, friend, child etc. It's not just writers who claim to have them, but artists too, of all kinds! People in the creative world seem to have something that works for them, helps them produce their art - be that painting, sketching, building, writer, creating, anything.

As a writer I've always had something "real" that I call my muse - for a while it was a stuffed monkey, called "Matt" that was a gift to me by a dear friend. However, Matt never reappeared when we moved house and so I am unsure if he ever made the move. As it so happens, up until now I've never had the need to replace him with anything. For a while it was because I was only writing in the summers and therefore didn't have the want or need for something physical to talk to when I got blocked.

However, my god daughter managed to get her 100m & 200m in swimming the other week and as a reward I said I would buy her something. We walked up and down the toy aisle in Tescos and I spotted the HexBug Nano's for sale and thought "Hmm, as I am known online as "JoeyBug" wouldn't it be appropriate for me to have a muse that was also a "Bug"?". I offered to buy my god daughter one, but she chose something else. The next day, however, I went back and brought myself one. They advertised that they had a purple one and as you all know, purple is my favourite colour! I couldn't find a purple one - they only seemed to have blue, green and black, so I settled for a black one.

It's a great little bug, it whizzes around in circles and has fallen off my desk and tried to escape more than once! I like it, and it seems to be working as the past week has been filled with chapters being written and one of my finished books almost has a front cover! My artist, and best friend, B now only has one front cover to draw and all the finished books are done. She plans to then go back and "update" the other front covers to have them all look more recent and "professional" as she puts it. So, keep you eyes pealed for new covers - you'll hear about them here first! Also you can "like" me on Facebook for all updates there too!

Anyway, back to writing some chapters - do any of you have "muses"? Are they a person, place or object?
Posted by Joey Paul at 10:28