My Internal Critic: How I Dealt With Neil - The Creative Process 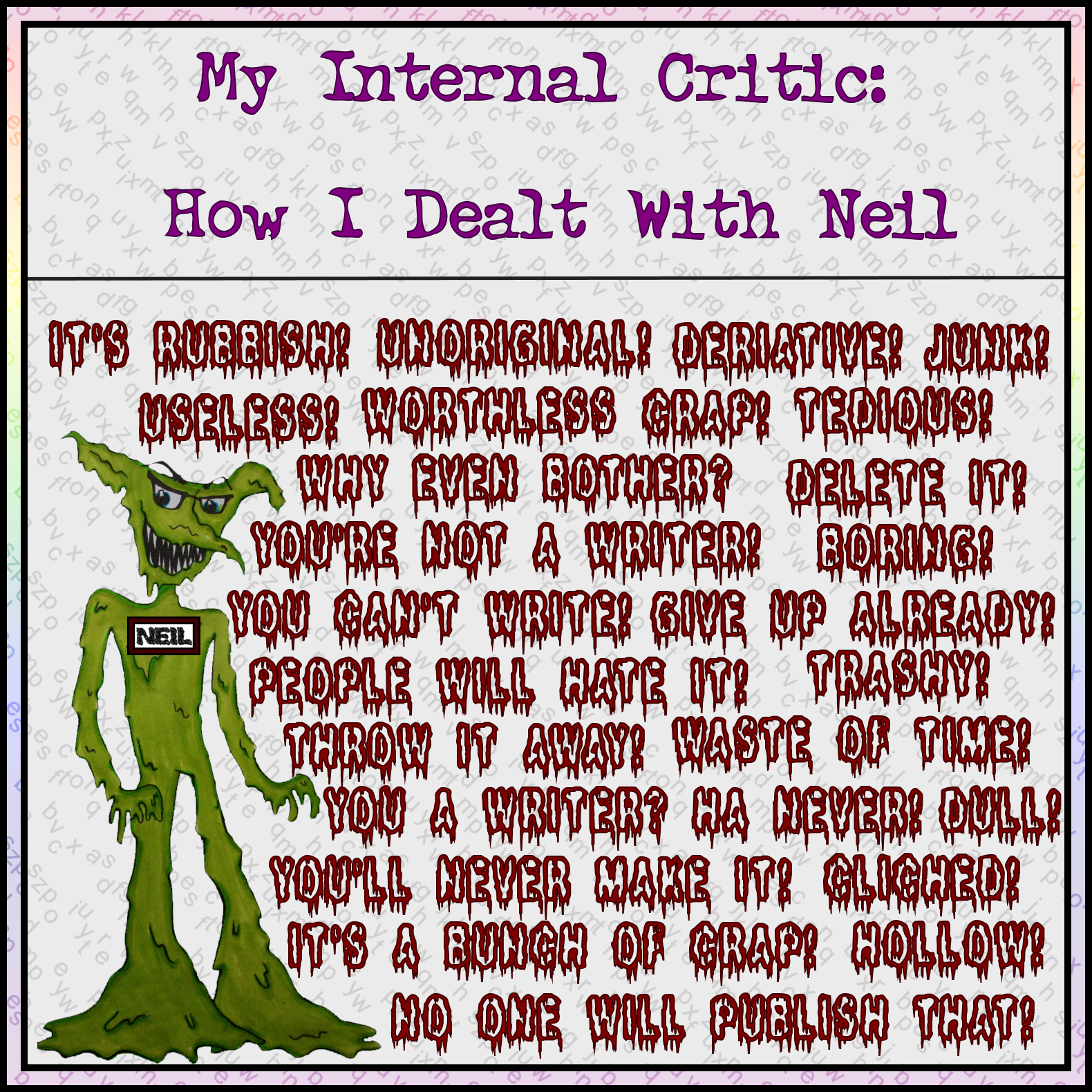 (Neil the Gremlin drawn by Paris)


My Internal Critic: How I Dealt With Neil

So, in my last post (found here) I introduced you to Neil. Neil lives in my mind and is never nice to me. He's mean, spiteful, causes me stress and worry and tells me I'm not good enough at writing to have been published. He tries to convince me to give up what I do and just sit in a corner rocking back and forth because I'm a useless waste of space. Neil is a gremlin, he's also my internal critic and I'm sure that some of you have a similar gremlin residing in your mind, that little voice that tells you how crap your writing is, or how your art sucks, or how you suck. In the first piece, I told you how Neil had affected my career and now I'm going to tell you how I dealt with him so that he now lives in a cage in the dark recesses of my mind.

It's not easy, and I'll be the first to admit that there are times when he escapes, but once you have the tools to deal with the abuse and negativity he flings at you, it's easier to put him back in the cage and apply a new lock to the door. I use several methods and while I am sure there are many good articles that will tell you other ways to silence your internal critic, this is my take on it. (But here and here (YouTube Video) are some other good ones).

#1 - PERSONALISE YOUR INNER CRITIC
My first step in taking control of my gremlin was to give him a physical form. I saw him in my head as a green blob, with slimy skin and a pair of glasses that just added to his stern look. After I'd done that, I named him - Neil - and used that to develop a relationship with him. As other writers more experienced than I have said, you can't get rid of your critic forever, as tempting as it may be. Your gremlin is there to help you get through life and make decisions and although sometime they go into overdrive and need to be reigned in, they do still need to be able to talk with you.

#2 - WHEN THINGS GET BAD, TAKE A BREAK
When I'm working, whether writing a chapter, doing editing, or writing one of these pieces for my blog, and Neil pops his head up to start yelling at me to stop because I'm nothing special and am crap at all I do, I take a break. I step back from what I'm doing and I give Neil a chance to finish his tirade and once he's done, I move onto the next step.

#3 - DISCUSSIONS WITH GREMLINS
When you're faced with criticism, whether it's your own or someone else's, you usually get the chance to discuss what they feel the problem is. So, if I'm writing a chapter and Neil tells me that the character hasn't been developed enough, or my joke is not funny, or that bit is totally unrealistic and why am I calling myself a writer anyway? That's when I have a frank discussion with him. There is nothing wrong with talking to your gremlin out loud. I know that for me I need a good talk through of problems before I can find a solution or move past the situation. It works the same when Neil starts to rile himself up and questions every word I choose to write. I ask him why he doesn't like that character? What is it about the words I am using that makes him think it doesn't reflect any skill? He may be pointing out something that I had missed, or it may just be a case of me reminding him that it's just a first draft and as someone famous once said, "the first draft of everything is shit!"

#4 - GET OUTSIDE VALIDATION
If I get to the point, as I did with WAITING ON YOU before it went to my editor, where I feel that maybe I should just press delete and release a different book, when Neil has convinced me that it is a worthless pile of words that will make no sense to anyone and will only show the world how awful I am as a writer, I turn to other people. Your internal critic is part of who you are. For some people, when they personalise their gremlin they see a person, their mother, a friend, a teacher that disapproved of their work, but for others, they realise it is just themselves, their own voice bringing up subconscious concerns about their work. For me, I have two people in my life whose criticism and judgement I know I can 100% trust in regards to my work. One is my editor, Kim (which is why she's my editor) and another is my best friend, B (who's also my cover artist). When I get to that point of despair, I call up Kim and talk it through with her. Or I ask B about a certain situation - she's read every word I've written and will always tell me if something needs to be changed or removed. Just as Kim will. They will be brutally honest with me, without tearing me to pieces. Sometimes you need an outside perspective to tell you if that voice is just nerves and concern, or if there really is an issue you're not seeing.

#5 - REMEMBER HOW FAR YOU'VE COME
As with any job, you don't produce excellent, ground-breaking, best seller work the second you start. It takes time to become settled in your career and to know what does and doesn't work. When your inner critic is reminding you of how much of a failure you are, take a second to look back and recognise what you've achieved in your writing life (and outside it too). Remind yourself that you have talent, that the first draft is where everyone starts and that you, hopefully, have a good team of beta readers, editors, proof readers, friends and family, who have and will continue to support you by telling you what works and what doesn't. It's important to look back and think "I have five books published, I've been nominated for an award, I sold 10,000 copies so far." It will boost your own self confidence and will probably silence your gremlin for a little while.

Finally, remember that while it is important to question your work and to strive for the best you can do, sometimes your inner critic can bring up a good point. It is important to not allow them to dictate your every move in both your professional life as well as your personal one, as that can sometimes mean the end of your career. As a writer, you are creating from nothing and breathing life into the characters and plot with your words. It's not an easy job, and it takes a lot of hard work, so try to go easy on yourself and not let the remarks of your gremlin stop you from doing something you love. I know that Neil almost cost me my career and I'm glad that another writer was kind enough to share her technique for dealing with her Neil before I had let him overpower my mind and stunt my creativity. Good luck, and remember that whoever you are, you're awesome, don't let anyone tell you any different!

Follow Joey on Facebook or here on her blog to be kept up to date with the latest news regarding Joey and her books.
Posted by Joey Paul at 14:46

Email ThisBlogThis!Share to TwitterShare to FacebookShare to Pinterest
Labels: being a writer, friends of Joey, internal critics, joey has a gremlin, joey writes, the creative process