Interview with Danny Bell and review of Empty Threat 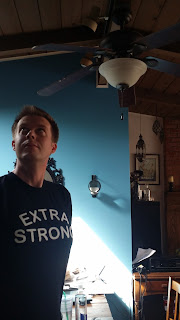 I am delighted to be joined on the blog today by young adult author, Danny Bell. I'm also doing a review of his book, Empty Threat. But first, here's a little bit about Danny.

Danny Bell writes The Black Pages. He has been to New York multiple times and on each visit has joked about looking for Spider-Man, but he was secretly seriously looking for Spider-Man. Given the chance he would own a pet squirrel. He can probably pronounce Tuatha Dé Danann correctly, but understands if he's getting it wrong. Danny Bell is a weirdo who is trying his best.

What made you want to be a writer?
When I was a kid I had a very rough childhood with no real safe space to speak of. I was also a fairly bright kid who absolutely devoured whatever book I could get my hands on. A huge thing for me was comic books. I would spend hours writing what was essentially fan fiction. Marvel was my jam, so I would smash together heroes and villains on paper with crayons the way some people played with action figures.

The sad truth is that life was already horrifying enough, so reading everything I could get my hands on made time move a little quicker. But the more I read, the more I wanted to contribute. I always loved the idea that when you write, there's no one to blame for a bad story except yourself. There are no limits to what you're allowed to say. You get to choose any combination of words you'd like, and whatever you choose represents you. That is the most exciting thing I can imagine.

What kind of books do you read for pleasure?
Anything from cheesy sci fi to books on mythology to history texts. Anything that can tell a story is what I want to read. I'm not so big on biographies, or autobiographies.

What kind of writer are you: plan or not?
If there was a spectrum for plan or not, my needle would break the gauge for the plan side. In my series, The Black Pages, I plotted out the first five books before I finished the first. I wrote the ending of the series and put it in an envelope, and I have no idea how many books will come out. More than five for sure. I developed an entire comic book universe to play with and creating over forty characters, many of whom might not ever see the page. I know what happens in every chapter of the book by the time I start. Sometimes things might change a little bit here and there as I go, but I have a road map. Whether it's a 5,000 word short story or a novel, I plan it out completely.

How does your average writing time go?
I am someone who believes that writing is more than typing. Reading is also writing. Saying the story out loud is writing. Outlining is writing. Thinking is writing. So when I am in writing mode, I can be doing just about anything as long as I am aware that whatever it is I am doing is for the benefit of the story. I’ve taken long car rides to nowhere just to be able to tell my story out loud. I pretend I am telling someone else a story, and do that repeatedly until I hear the thing that sounds right to me.

By the time I sit down to type I know what I want to say and I’m focused.

What book/character of yours is your favourtie?
A series that I absolutely love right now has to the be the Felix Castor series by Mike Carey. It draws some comparison to The Dresden Files, but what fantasy series doesn't these days? I'm sure my series will as well.

That said, my favorite characters are always the ones who are easy to underestimate but cam solve a problem by being brave, clever, and thoughtful. Fantastic Beasts and Where to Find Them is a great, recent example of this. Newt is a great protagonist, but my favorite character was Queenie. I could read an entire series about her. When you meet her initially you're supposed to get the impression that she's not too bright. It couldn't be for her from the truth. In one of the most magic filled worlds, her biggest spell was for making dinner. Outside of that she accomplished everything by thinking it through, and she was willing to jump into battle if need be.

What attracted you to your chosen genre?
It was important for me to be able to tell a story that would influence people at a critical stage on their lives. When I first thought of the concept for my story, it had the very real potential to be a dark, adult tale. I chose to write to the young adult/new adult crowd because that's who needs the guidance that can come from story telling more than anyone.

The moral of my story is that everyone is equally important, not just who seems to be the coolest or who gets the most attention. You are the only one who can live your life, make your own choices, and the rest of the world needs you. It's a fine lesson for anyone, but for high school kids? Even college kids? That is when people are at their most vulnerable and they need to hear that they matter.

How have other writers influenced your own writing?
I'm a huge literary nerd, so in my experience after a while reading something by a particular author comes across as just another way of someone speaking. And in the same way that you can sound like any given friend of you spend too much time with them, writers can do the same thing to you. I make it a point to read far more than I write, but I try to take bits and pieces from their patterns, just enough to let it enhance my voice rather than becoming a parrot for whoever I was reading at the time.

Do you have a writing playlist? Or do you prefer silence?
Depends on the scene. I will listen to synth pop one minute, indie folk music the next, and then forest sounds and pan flutes the minute after that. Silence doesn't work for me, it just gives me a reason to get distracted.

What's your favourite kind of scene to write?
Dialogue. Any kind of conversation. Trying to put yourself in the place of two or more people at a time takes a bit of thinking, but when you are honest and thoughtful with how everyone would act and react in a situation, some of your best work can come out of that. 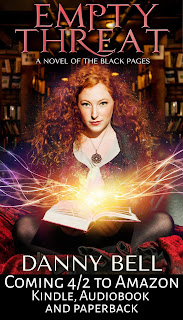 Book one of The Black Pages Elana Black has the power to make herself fictional. But when she decides to start saving all the people in books and TV shows who die just for the sake of advancing the plot, she quickly learns that she's not the only one with her powers. All Elana wants to do is save people. But these others don't want the stories to change, and they'll do everything they can to stop her. If you had the power to change fate... to create a happy ending where there wasn't one before... would you do it if it meant risking your own?
Amazon

I love the synopsis of this book and was delighted to pick up a copy. It starteed brilliantly and pulled me in almost instantly. The story starts with Elana trying to avoid socialising by using her talent to jump into a fictional world. It's only when she wakes up in the real world that she realises that this time was different. The book was brilliant and I loved the whole idea. I loved the way the story was told and how it seemed to join up with various clues sprinkled in the pages. It was amazing and an excellent start to what looks to be a brilliant series. I will be watching this author for more books! Highly recommended!

Email ThisBlogThis!Share to TwitterShare to FacebookShare to Pinterest
Labels: a book a cat and a cup of tea!, author's life, indie author, interview, other writers, writer's life