Interview with May Freighter and review of Russian Roulette 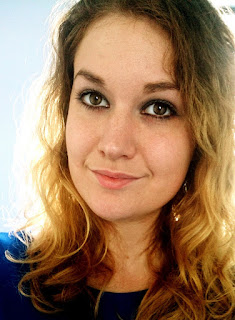 I am pleased to welcome May Freighter to the blog today for an interview and review of her book - Russian Roulette. Here's a little about May.

May Freighter is an internationally bestselling author from Dublin, Ireland. She writes Urban Fantasy, Paranormal Romance, and Sci-Fi mysteries that will keep you entertained, mystified, and hopefully craving more. Her only pets are cacti. They're the sole things that survived. It may be too dangerous to entrust her with an animal while she's engrossed in writing. ​ On sunny, rainy, and overcast days, she spends her time with her fictional friends, putting them through dangerous adventures while wishing them the best of luck. Her hobbies are photography, drawing, and plotting different ways of a characters' demise.

What made you want to be a writer?
I had a lot of stories brewing in my head when I was on a bus or bored in class. I never paid much attention to them until one day I started writing one down. Over time, a page became ten, a chapter turned into more. After a couple of months, I was looking at a book of 120,000 words. I guess from that point on, I started to consider writing as a possible career path. It was something I enjoyed and the feedback I got from my beta readers urged me to continue on.

What kind of books do you read for pleasure?
For pleasure, I tend to read Paranormal Romance, Romantic Suspense, and Mystery.

What kind of writer are you: plan or not?
I used to plan all the time. Being a bit of a control freak, it was hard for me to start a book without knowing exactly what will happen in it. But, as the years went by, I noticed that I began trusting my characters more. If they are developed enough, they take the reins and guide the plot to its conclusion.

How does your average writing time go?
I try to start writing after sorting through my emails and messages. So, I could end up writing from 10 a.m. until 3-5 p.m. If I can do more after such a long session, I tend to continue on until late into the evening. Remembering to take breaks is important. It’s easy to get lost in the story you’re writing and forget that there are dishes that need washing or laundry that needs doing.

What book/character of yours is your favourite?
If I had to pick one, I would say Lucious Ellwood—a vampire from Helena Hawthorn Series. He is complex on many levels, and it was hard getting into his shoes in the beginning. Initially, he was not a character who easily shared what was in his heart. He distrusted people and other supernatural beings easily as that was how life had shaped him. But, even though he has done a lot of terrible things in his past, he tries to redeem himself by doing his best to change for Helena. I believe his willingness to change and adapt for love makes him my favourite character.

If you had the chance to write anywhere, where would you choose?
Somewhere with a great view like in the countryside or at a mountain lodge. Busy cities are distracting and noisy. I like to work in peace. It helps me think.

What attracted you to your chosen genre?
Mystery, whether in paranormal or in sci-fi series that I write, is a genre that I love and always will. I think a story must have a good mystery embedded in the plot. So, I try to entertain my readers by putting my characters into situations where many people tell lies, change facts, use others—much like in real life.

How have other writers influenced your own writing?
There are many authors I am thankful to for their guidance, support, friendship, or simply for being the reason why I write in the genres that I do. I’ve spent my childhood and teenage years enjoying paranormal stories, murder mysteries, horror, and they had all influenced my style. To name a few who have influenced my writing or helped me with advice: Darren Shan, L. J. Smith, Christopher Pike, Sir Arthur Conan Doyle, C. J. Laurence, R. K. Close, Anna Santos, and Juliet Lyons.

Do you prefer to type or hand write?
I prefer to type. When I first started writing, I wrote in the notebook and it took forever to transfer everything onto the computer. I still remember long evenings after college where I sat on the bed and looked back and forth between my scribbles and the laptop screen. It took twice as long, so I stuck with putting everything straight into the computer unless it’s the plot outline, maps, backstories, or character descriptions. Those I prefer to write out in the notebooks.

Do you have a writing playlist? Or do you prefer silence?
Silence works best for me. I only prefer listening to music when I am designing a book cover for someone or drawing.

Do you have any hobbies?
My hobbies are binge-watching TV series, drawing, walking in the park, and photography. I would love to add travelling to that one day.

What's your favourite kind of scene to write?
I would have to pick action sequences. They tend to go by so fast that I don’t notice the time flying by.

Would you ever like to branch out to a different genre?
Of course. I love playing with different genres. As an experiment and to push my own boundaries, I try out new genres now and again to see if I am comfortable with them and if they are something I would like to improve and work on more.

What does your writing space look like?
It consists of a laptop, a mouse because I prefer it to the touchpad and it’s easier to edit things, a cup of tea, and that’s about it. I do prefer working behind a desk, but if it’s taken then I often end up typing on the sofa. 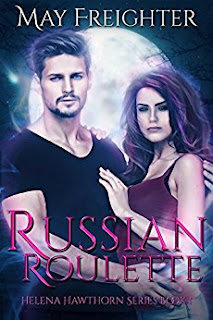 Who could guess that one brush of a fingertip over a shimmering soul-string could flip your world upside down and inside out?

Nineteen-year-old Helena’s life changes when her spirit enters the Angel Realm in search of her father. But, things don’t go as planned. Against her guardian angel’s warnings, she binds her soul to a vampire—a creature she thought only existed in horror movies.
Lucious has spent his immortality looking for the monsters who killed his sire. The last thing he needs is to be vulnerable because of a bond with a reckless girl. Yet, he sees how he can turn this to his advantage. Believing that Helena possesses great power, he plans to use her against the Council as a bargaining chip.

When Helena meets the gorgeous and also terrifying vampire with whom she’s now stuck sharing an emotional bond, she realises that her life will never be the same. Despite fighting against Lucious’s manipulative ways, she can’t deny their attraction.

As their desire for each other intensifies, she needs to know if she can trust him. After all, her life and soul are on the line.
Amazon

I loved the synopsis of this book and so picked it up hoping for a good read, and it was very much a good read. Helena's life changes when she ends up joining her soul to a vampire. From there she finds her life changing rapidly from that of a normal teenager at college to someone mixed up in the supernatural world of vampires, and demons. The story is engaging and well written. I loved the way it was told and my only criticism is sometimes Helena came off as more annoying than likeable. Having said that she was going through hell so that's understandable. The story moves rapidly from point to point and ends on a note that will leave you desperate for the next in the series. I'm not a vampire book lover, but I know i'll be reading book two. Recommended.

Join Joey here on the blog on Fridays for interviews, reviews and guest bloggers. If you'd be interested in doing any of those, you can contact Joey here.
Posted by Joey Paul at 07:59