Review of Fragmented by Madeline Dyer 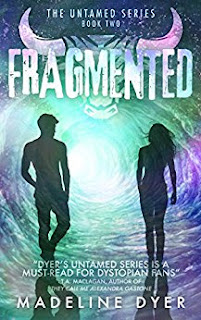 After the terrible battle against the Enhanced Ones, Seven and Corin find themselves on the run. With the Enhanced closing in, Seven knows they need to find other people on their side. So, when the opportunity arises to join the Zharat, one of the last surviving Untamed tribes, it seems like the perfect solution.

But the Zharat lifestyle is a far cry from what Seven's used to. With their customs dictating that she must marry into their tribe, and her relationship with Corin breaking down, Seven knows she has to do something before it's too late. But that's easier said than done in a tribe where going against the rules automatically results in death.

And, with the Enhanced still out there, nowhere is truly safe for the Untamed-least of all for the most powerful Seer in the world... and Seven soon discovers how far people will go to ensure she's on their side in the War of Humanity.

Battling against the emerging web of lies, manipulation, and danger, Seven must remember who she was meant to be. Her life has never been more at stake. Nor has humanity itself.
Amazon

My review: 5 stars
I was so glad that I could pick up the next book in this series and give it a read. The story picks up from the end of the terrible battle. Seven and Corin, as well as Esther are desperate to find a safe place to be. With a rush of bravery, Seven jumps in feet first and finds what she believes to be that safe space. But is it really safe? The story was engaging, well-written and kept me turning the pages late into the night. I loved it, and am so glad that I already have book three on my Kindle so I can continue this amazing story! Highly recommend for those who love a dystopian with a mythological twist!

Join Joey here on the blog on Fridays for interviews, reviews and guest bloggers. If you'd be interested in doing any of those, you can contact Joey here
Posted by Joey Paul at 08:35