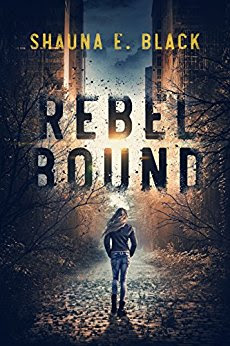 A city without light ... without hope.

Caelin is a survivor. It’s been eleven years since a nuclear disaster drove much of the population underground. Caelin and her young sister Mardy were left topside, where Caelin uses salvage to trade for shelter. Until she gets stabbed, and a handsome stranger named Jate saves her life.

Jate brings the sisters to rebel turf where plans are being hatched to conquer the Undercity. The rebels preach good life for the masses, and both Caelin and Mardy are hooked on the dream. But as Caelin is drawn deeper into the rebel’s inner circle, passion ignites between Caelin and Jate, and he suddenly seems determined to push her away.

Then she discovers the harsh price of loyalty. The rebel’s dream becomes a nightmare that puts her sister on a dangerous mission to the Undercity. Caelin must determine who to trust before Mardy and the population of the Undercity are wiped out.
Amazon

My review: 5 stars
I love a good dystopian and when this one crossed my view I had to read it. The story starts with Caelin out scavenging or anything that will buy her and her sister another night or two at the local shelter. The world unable to be out during the day because of the nuclear fallout. They've managed for themselves since their father disappeared and now it's Caelin's job to keep her sister safe. The story had me hooked from the first page, as we delved deeper and deeper into the story, with the rescue by Jate and all that entailed, I couldn't wait to find out what happened, whether Caelin and her sister would survive. It did not disappoint, and was an excellent read. I will be looking forward to the next in the series as I have to know how this story ends! Highly recommended!

Join Joey here on the blog on Fridays for interviews, reviews and guest bloggers. If you'd be interested in doing any of those, you can contact Joey here
Posted by Joey Paul at 08:41