Review of Divided by Madeline Dyer 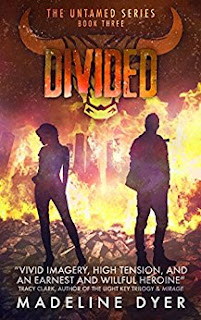 Having been tricked into binding herself to the Enhanced Ones in the War of Humanity, Untamed human Seven Sarr has never felt more exploited or used. When Raleigh forces her to develop her Seer powers and use them on a most innocent target, Seven knows it's only a matter of time before the Enhanced Ones use her to wipe out the rest of her people.

Certain that the only way to save the Untamed would be to get back full control of her soul, Seven must get the Gods and Goddesses to trust her again. Only they can destroy her Enhanced Promise Marks and prevent her enemy from controlling her.

But these are the same Gods and Goddesses who have already branded Seven a traitor and exiled her from the Dream Land, fearing she will cause their deaths. With no way to contact the Gods and Goddesses herself, Seven needs help. And she needs it quickly, before the war is over and she loses Corin, and the rest of the Untamed, for good.

Yet, in a world as dangerous as this, only one thing's for sure: no one trusts a traitor twice.
Amazon
My review: 5 stars
I was so glad to be able to dig into this one straight away and not have to wait for a release. The end of book two was amazing and this one started just as brilliantly. It was a wonderful story, with excellent craft. Seven tricked into binding her soul to Raleigh and it all looks bleak. I found it so hard to put down every night to sleep, and rushed through to the end. I felt like I have been on the same journey with Seven and this book did not disappoint. It was enthralling and just plain good! Loved it and will be happily looking for the next in the series when it comes out. Highly recommended!