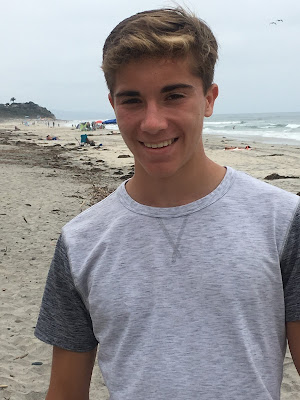 I am delighted to be welcoming Michael Evans to the blog for both an interview and my review of his book - Control Freakz. Here's a little about Michael.

Michael Evans is the author of the novel Control Freakz, a Young Adult Post-Apocalyptic Thriller, and the forthcoming novel entitled Delusional. He is currently attending high school in Mt. Pleasant, South Carolina, but he is originally from Long Island, New York. Some of his hobbies include hiking, running, camping, going to the beach, watching and taking artsy pictures of sunsets (it’s honestly a very enlightening activity to partake in), and walking his ginormous, fluffy golden doodle underneath the stars. He is also fascinated with the environment and neuroscience, and his true passion is learning about how the wonders of the human mind and the environment we live in will change with time. The future, specifically his goal of helping to impact the future of humanity positively is what drives him to tell stories. Writing is something that is instinctive to him, and he seeks to express his thoughts on his own life and the world to inspire others to use the power in the voice they have to advocate for positive changes in their own lives and the world we all live in.

How long have you been writing?
Since I could read! It was almost instinctual for me to write as soon as I was able to understand words, and I imagine before that I was stringing stories together in my head. However, I didn’t begin writing seriously until I was 13, when I wrote my first novel. I have since re-written and published it, and am currently working on getting my second book entitled Delusional published, and finishing up writing the first draft of my third book entitled Triggered.

Do you write in the genre you love to read?
Yes! I love speculative fiction, and

Are you an organised writer or not?
That depends on who you are talking to! I would say I’m pretty organised, in the sense that the ideas in my head are always communicated well on paper, however, at points, especially when I’m developing the plot of my novel, all the thoughts in my brain can get jumbled up and I usually have to stop and write them all down.

What's your idea of a perfect writing day?
I would be at the beach (preferably some place tropical), and instead of having a computer I would have a pen and rustic journal in hand. I would spend the entire day writing next to the soft waves of the ocean, while of course taking a break to go in it, and I would be able to see the gorgeous, ineffable sunset as the words flowed out of my mind like the crisp, breeze in the air.

Do you like editing or is it something you loathe?
I hate editing! It’s my least favorite part about writing. I know that it’s necessary, however by the time I’m done writing one novel my mind is already wrapped up in the next!

What's your favourite social media? And why?
I like Instagram because it's the best platform to showcase my pictures of sunset, which I’m very fond of.

How would you describe your writing process?
First I think of a theme I want to convey, then an overarching concept that can portray it in an effective and entertaining way. After this, thoughts about the plot and characters begin to pop into my head and I will write them all down for a couple weeks. After I have written a rough outline of the personalities of the characters and have a beginning plotpoint for my novel I begin to write and see where the story takes me! Usually it takes me anywhere between 4-6 months to write the first draft of a novel! After this, I do a round of editing and revision and take a break (usually to write the first draft of another novel). Then, after a couple months have passed I usually revisit the manuscript of the novel and edit and revise it again before sending it off to an editor.

How often do you write? Do you have a schedule?
I try to write for an hour everyday, however sometimes that gets messed up. I try to write every single day in the library after school, and then I try to find some time on the weekends but with life it certainly gets tough. 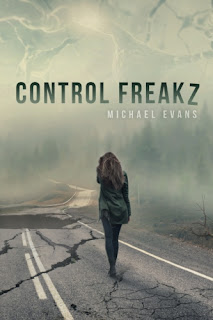 Alone. Abandoned. Threatened. Natalie has lost all hope for a better future. Everything she’s known and everyone she’s ever loved is gone, and it’s up to her to get her old life back. In Michael Evans’s first novel, Control Freakz, Natalie’s journey toward a better life begins.

When Protocol 00 is enacted, Natalie’s family is taken by the government, along with the families of her two best friends, Ethan and Hunter. With nothing to lose, and the threat of government hitmen kidnapping them at any moment, the three must battle to survive in a horrid, post-apocalyptic world run by President Ash and his invasive government. They want answers. And they’re willing to jeopardize everything in desperate pursuit.

Risking ruthless leaders, attempted mind control, and her very existence on the planet, Natalie, along with Hunter and Ethan, will stop at nothing in their quest to regain everything they’ve ever known. Her spirits crushed and her will to live destroyed, Natalie knows everything is dead and gone, and soon she will be, too.

My Review: 3.5 stars
I started this book excited about the prospect of the story. The synopsis grabbed me and knowing it'd been written by a teen also made me excited about the story. As I read it, I enjoyed the basis of the story, the drama and the action, but I felt there were a number of things missing. In some places the plot was on point, heavy and pulling you into the story, like the beginning of the story and their journey to safety. At other points it felt like there should be more to it, like when the book skipped three years with no notice and no indication of why or what had happened. Overall, it was an enjoyable book, and you can definitely see the promise that the author has. You can also not help, but grow attached to the characters as they go on their journey. However, it was not a favourite read and there were times when I felt certain points were repeated too much. But, I will be reading the sequel and I did enjoy the book!

Join Joey here on the blog on Fridays for interviews, reviews and guest bloggers. If you'd be interested in doing any of those, you can contact Joey here
Posted by Joey Paul at 08:03

Email ThisBlogThis!Share to TwitterShare to FacebookShare to Pinterest
Labels: a book a cat and a cup of tea!, author's life, indie author, other writers, writer's life