Review of Awoken by Trish Beninato 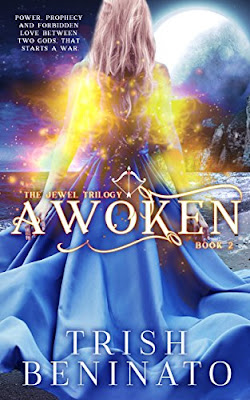 Prophecy, destiny and a war that entangles two ancient gods…

Eighteen-year-old Jewel, reliving her memories finds herself suddenly thrust into the past living in the world of mortals. Only this life and this version of herself is different. Yet, one thing stays the same, she finds herself in the path of Anubis an Egyptian god. She needs him even though it could cost her everything. But Anubis just sees her as an annoying complication to his quiet life he just can’t have- at least that’s what he tells himself. Even as he is drawn to the beautiful, dangerous goddess.
With Jewel's impending activation and Zeus trying to find them, Jewel and Anubis find themselves needing each other more than they care to admit. Only someone is about to betray the other.

Can Jewel save all of humanity from her own family in time?
Amazon

My review: 5 stars
I loved the first book, and I wasn't disappointed with the second. Throwing you into the story from where the first book left off, you're taken right back to the past with Jewel and led through the story of her finally meeting Anubis and the relationship that developed from there. It was beautifully told and great to see the back story of the characters we'd met in the first book. I enjoyed it immensely, and am now anxiously awaiting the third in the trilogy! Highly recommended!

Join Joey here on the blog on Fridays for interviews, reviews and guest bloggers. If you'd be interested in doing any of those, you can contact Joey here
Posted by Joey Paul at 09:03