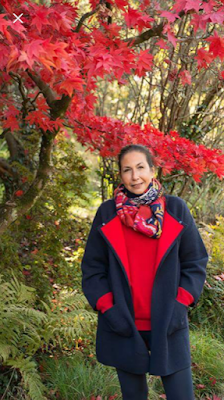 I am delighted to be joined by Hannah Fielding on the blog for an interview and my review of her book: Aphrodite's Tears. Here's a little about Hannah:

HANNAH FIELDING is a multi-award winning romance author who was born and grew up in Alexandria, Egypt, the granddaughter of Esther Fanous, a revolutionary feminist and writer in Egypt during the early 1900s. Upon graduating with a BA in French literature from Alexandria University she travelled extensively throughout Europe and lived in Switzerland, France and England. After marrying her English husband, she settled in Kent and subsequently had little time for writing while bringing up two children, looking after dogs and horses, and running her own business renovating rundown cottages. Hannah now divides her time between her homes in Kent and the South of France. She has written six novels: Aphrodite’s Tears; Indiscretion, Masquerade and Legacy (the Andalucían Nights Trilogy); The Echoes of Love and Burning Embers. Hannah’s books have won various awards, including Best Romance for Indiscretion at the USA Best Book Awards. She has also won Gold Medal for romance at the Independent Publisher Book Awards (The Echoes of Love), and Gold and Silver Medals for romance at the IBPA Benjamin Franklin Awards (Indiscretion and Masquerade). She is a member of the association for Romance Writers of America (RWA) and her website and blog can be found at www.hannahfielding.net

How long have you been writing?
Behind closed doors, for as long as I can remember. My earliest memories of writing are penning romantic stories, which I would circulate among my classmates. This made me quite popular with the girls at my convent school, but far less so with the nuns!
My debut novel, Burning Embers, was published in 2012, and since then I have published five more novels.

Do you write in the genre you love to read?
Absolutely. I love romance novels, and have been reading them since my teens. I read a lot of non-fiction too, as part of the research for my writing, and I love classic literature. But when it comes to modern genre fiction, you will always find me in the romance section of the bookstore – most likely sighing dreamily.

Do you have any favourite authors to read?
I love romantic writers like Victoria Holt, MM Kaye, Charlotte Bronte and Daphne du Maurier. I am also very inspired by the French romantic authors of the 19th century, like Stendhal, Musset, Theophile Gautier, Leconte de Lisle and Victor Hugo, whose works formed the basis of my university degree in literature.

Are you an organised writer or not?
I am highly organised when it comes to my writing. Having researched my facts thoroughly, I plan my novel down to the smallest detail. Planning ahead, I have found, makes the writing so much easier and therefore so much more enjoyable. I use my plan as a map. I never set out on a long journey by car without a map, and the same applies to my writing. By the time I write the first paragraph, I know the story, the characters, the setting, the mood – everything.
H
ow often do you write?
Daily, whenever that is possible, although of course I take time out to spend with family, to travel and to rest. Certainly I try to keep to a writing routine on week days. I treat my writing as a job – my dream job, actually.

What's your idea of a perfect writing day?
I’m at my home in Sainte-Maxime, in the south of France. The sun is shining, promising a warm day ahead, and so I gather my notebook, my dictionary and my laptop and set up for the day in the gazebo. It’s shady there, and the air is fragrant with the scent of the many lavender bushes all around and I can just hear the crash of distant ocean waves.
I write until mid-afternoon, pausing only for a light lunch which includes delicious fresh figs from the garden, and then I drive out to a local village, order a café latte and people-watch. Often, this inspires ideas for characters, and so I jot down notes, before taking a walk on the beach or across a field of wildflowers.
Then I’ll return home, put away my writing materials and close the door to my office, another day’s writing done and an evening ahead to enjoy with my family.

Do you prefer ebooks or paperbacks? Why?
Paperbacks every time. I own an ereader, and I use it when I travel. But I find I don’t connect to the story in quite the same way. I love books as objects – the smell of the ink, the rustle of the pages. Just to hold a book in my hand is such a comfort. A passport to a whole new world!

What's your favourite idea of a cosy afternoon?
Cosy, to me, means being tucked up safe and warm inside while the weather rages outside. I love to sit on a window seat in my home in Ireland with a fire crackling merrily in the grate. I sip tea and read a book, but mostly I just watch nature’s spectacular show through the window panes – the trees dancing in the wind, the rain pitter-pattering on the window panes. Sometimes, after the storm I am treated to the most beautiful of sights: a rainbow arching right through the sky. I am yet to follow that rainbow and discover whether the legend of a pot of gold is true… 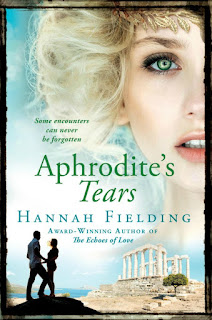 A young archaeologist who travels to the remote island of Helios to investigate an ancient shipwreck, becomes caught in a web of dark obsession, mystery and seduction in Hannah Fielding s latest novel. In ancient Greece, one of the twelve labours of Hercules was to bring back a golden apple from the Garden of Hesperides. To archaeologist Oriel Anderson, joining a team of Greek divers on the island of Helios seems like the golden apple of her dreams.Yet the dream becomes a nightmare when she meets the devilish owner of the island, Damian Theodorakis. In shocked recognition, she is flooded with the memory of a romantic night in a stranger s arms, six summers ago. A very different man stands before her now, and Oriel senses that the sardonic Greek autocrat is hell-bent on playing a cat and mouse game with her. As they cross swords and passions mount, Oriel is aware that malevolent eyes watch her from the shadows. Dark rumours are whispered about the Theodorakis family. What dangers lie in Helios: a bewitching land where ancient rituals are still enacted to appease the gods, young men risk their lives in the treacherous depths of the Ionian Sea, and the volatile earth can erupt at any moment? Will Oriel find the hidden treasures she seeks? Or will Damian s tragic past catch up with them, threatening to engulf them both?
Amazon

My review: 4 stars
I enjoyed this book in that the history discussed and the story weaved through the myths, legends and characters were amazing. It was beautifully told and made me feel as if I were there as well. With Oriel having had one night of love and then lost him to his travels, it was nice to see the pair fall in love all over again as they met up six years later. The book was well written and the descriptions were on point. It's not my usual genre, but one I still found myself looking forward to every night.

Join Joey here on the blog on Fridays for interviews, reviews and guest bloggers. If you'd be interested in doing any of those, you can contact Joey here.
Posted by Joey Paul at 09:40