Review of In The Shadows by Sharon McDonnell 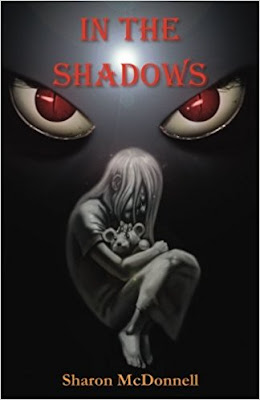 Until the age of fourteen Kiki lived a normal life, she was a happy, well-adjusted teenager, the only thing that marked her as different was her belief in her imaginary friend, Gabe. Shortly after her fourteenth birthday everything changed. Gabe was gone, and in his stead, came vile creatures out of her worse nightmares who wanted to control every aspect of her life.

Desperately trying to get on with her life Kiki hides what is happening from everyone, except her sister Tracey. As her sister’s mental state deteriorates Tracey’s is forced to take action

Kiki is hospitalised where she is drugged and is now at the mercy of her tormentors. Then begins an extraordinary journey into darkness that draws many people into her inner hell.
Amazon


My review: 4 stars
This sounded like my kind of book, and so I picked it up. It was a different style than I'm used to in it all being told as prose rather than any dialogue, but once I got into it, I started to find it easier to follow. It tells the story of Kiki, Tracey and some of the people they meet along the way. Kiki has had a normal childhood, up until she reaches the age of fourteen and then everything seems to change for the worst. Tracey intervenes and it ends up with Kiki being admitted to a hospital, all the while trying to fight the darkness and inner hell. It was an interesting twist as the book continued and I found myself enjoying it as it came to an end. Good read.

Join Joey here on the blog on Fridays for interviews, reviews and guest bloggers. If you'd be interested in doing any of those, you can contact Joey here.
Posted by Joey Paul at 08:26