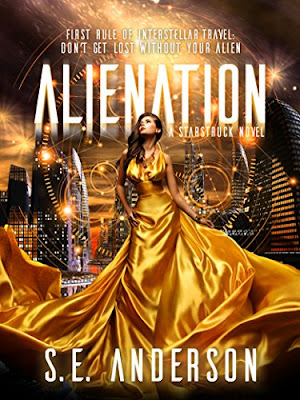 Sally Webber's dream is coming true: Zander is back and taking her out for a night on the town--on a planet hundreds of light years away from Earth.

But when an accident separates her from her alien tour guide, she’s thrown into the seedy underbelly of an insane city where nothing is as it seems. Suddenly lost and desperate to get back home, Sally is willing to do anything to get out, even if it means accepting spontaneous marriage proposals, crashing some fancy parties, or joining what appears to be the space mob.

All she wanted was some decent interstellar pizza, but now it might be the end of the world as evil nanobots and an out of control AI try to take the universe by force, and the only one who can stop them is missing in action. Sally has no choice but to try to stop them herself--if she can stay alive that long.
Amazon

My review: 5 stars
I loved the first book in this series and was so pumped about reading the second. It was amazing and I couldn't put it down. Taken to a far distant planet our favourite Sally is trying to have her one-time adventure and make the most of it. Of course things aren't always that easy! The book was engaging from page one, I was super excited, pulled into the story and managed to read it all in one sitting. I love Anderson's way of telling the story in such a down-to-earth way even when we're completely off earth! The words pull you in and bring you along for the ride. Anderson is an author to watch! Highly recommended!

Join Joey here on the blog on Fridays for interviews, reviews and guest bloggers. If you'd be interested in doing any of those, you can contact Joey here.
Posted by Joey Paul at 08:59