Review of Keeper by Kim Chance 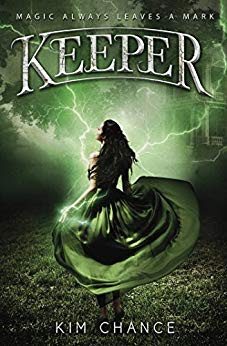 When a 200-year-old witch attacks her, sixteen-year-old bookworm Lainey Styles is determined to find a logical explanation. Even with the impossible staring her in the face, Lainey refuses to believe it—until she finds a photograph linking the witch to her dead mother.

After consulting a psychic, Lainey discovers that she, like her mother, is a Keeper: a witch with the exclusive ability to unlock and wield the Grimoire, a dangerous but powerful spell book. But there’s a problem. The Grimoire has been stolen by a malevolent warlock who is desperate for a spell locked inside it—a spell that would allow him to siphon away the world’s magic.

With the help of her comic-book-loving best friend and an enigmatic but admittedly handsome street fighter, Lainey must leave her life of college prep and studying behind to prepare for the biggest test of all: stealing back the book.
Amazon

My Review: 5 stars
I picked this up because the blurb called out to me. I was pulled in by the first page, wanting to know more about Lainey and all the secrets in her past. I loved how well the story was told, how the mysteries were weaved in the words and the just beautiful prose. The strong friendship between Laniey and Maggie. The idea that two friends can be there for each other no matter what. My heart ached as the story continued and I saw what might happen, but I was not ready for that ending. It was a thrilling ride and I look forward to the sequel. Highly recommended!

Join Joey here on the blog on Fridays for interviews, reviews and guest bloggers. If you'd be interested in doing any of those, you can contact Joey here.
Posted by Joey Paul at 06:48