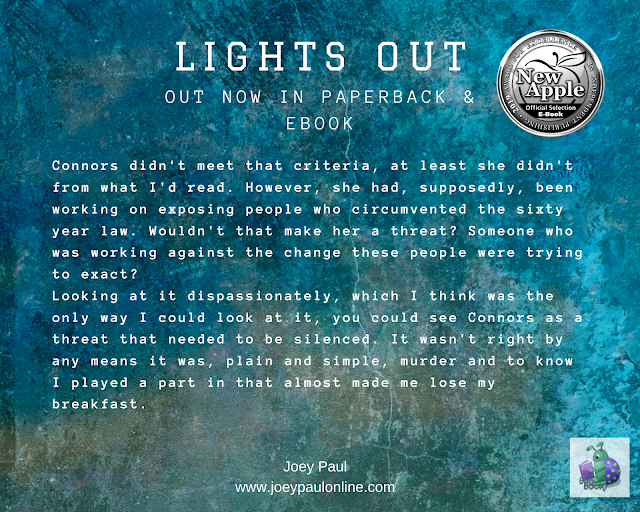 Lock knows something serious is going on, but she hasn't yet joined the dots...


[ID: A graphic with a blue background the header reads: LIGHTS OUT, with a small header underneath reading: out now in paperback & ebook. To the right of those is a New Apple award seal. The excerpt reads:

Connors didn't meet that criteria, at least she didn't from what I'd read. However, she had, supposedly, been working on exposing people who circumvented the sixty year law. Wouldn't that make her a threat? Someone who was working against the change these people were trying to exact?
Looking at it dispassionately, which I think was the only way I could look at it, you could see Connors as a threat that needed to be silenced. It wasn't right by any means it was, plain and simple, murder and to know I played a part in that almost made me lose my breakfast.
At the bottom is Joey Paul and her website www.joeypaulonline.com and in bottom right corner is the logo for Bug Books.
END ID]
Posted by Joey Paul at 05:54