Review of Vampires And Werewolves by RL Medina 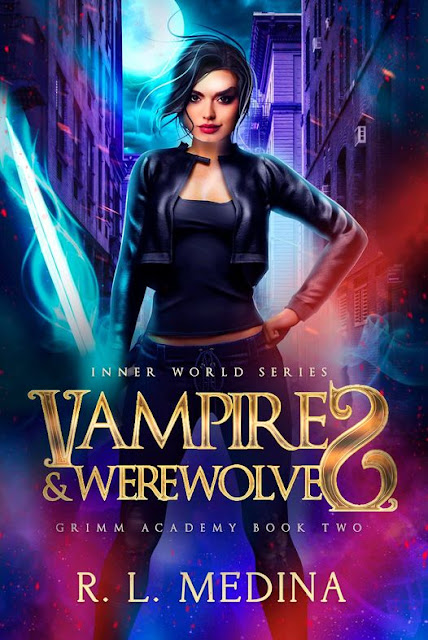 A promise made in blood cannot be undone….

Those are the words that have royally effed up my entire life. The promise my mother made to the coven before she died and the one the witches are hell bent on me fulfilling. They think they own me.

Nobody, I repeat, NOBODY owns me.

Not the GRIMMS who want me to be their obedient little soldier. If they knew who I really was, I’d be next on their hunting list.

Certainly not the coven who has some crazy agenda to use me as a pawn against the GRIMMS. They already have the shifters on their side, and now vampires. These witches want a war. Supernaturals against humans, you know, the usual story.

I don’t want any part of it. I just want my freedom.

To get it, I’ll have to make a deal with the werewolf mafia so they can help me locate the only thing more powerful than both the witches and the GRIMMS—a wizard. When their help leads to a vampire attack, a dead witch, and a dead end, Javi and my friends (including the infuriatingly hot and cold Grayson) swoop in to save the day.

But can I risk their lives to save my own? When they find out my real identity, will they still be on my side?

I’ve already lost my parents, I can’t lose them too.

I read the first book and was desperate for the second so picked it up on release day. Rose has gone through hell, and yet it doesn’t seem to be over for her yet. Out from under the compulsion spell, she’s running away to try and subvert the curse that lay over her. The story pulls you in from the first page and you find yourself desperate to go along for the ride. The characters are well rounded, the twists ones you won’t see coming. The hint of romance leaves you wanting the ending to be one where everyone gets what they want, but alas, there is a third book, which I am just as desperate to read. Overall, an amazing sequel and a series that I will be following. Great read!