The Trials Of An Indie Author: Building Takes Time 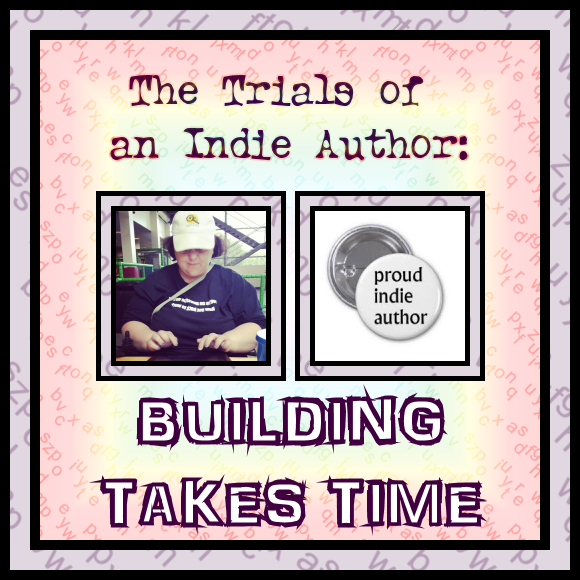 THE TRIALS OF AN INDIE AUTHOR: BUILDING TAKES TIME

This is a subject that I keep coming back to time and time again. I know that I'm a small fish when it comes to being an indie author, and I know that I need to do a whole ton more to get to the point where I'm a bigger fish, but I have to keep coming back to the point of it all. It takes time. Very very few authors, indie or otherwise, are overnight successes. There may be the odd one or two here and there, but behind all of them is someone who started off as a small fish and then broke out at some point.

It's hard work, it can be demoralising, it can get to the point where you wonder if it's worth it, and that's where I've been recently. With health stuff ramping up the anxiety and having had to pull my second release of the year, I can't help but wonder if I'm ever going to get to the point where I am a bigger fish, or if I'll be stuck in this small pond for the remainder of my career. I wish I had some answers for you, but the honest truth is, I don't. I just thought that sharing it would help other people feeling the same way.

The truth of the matter is simple, building an audience, creating a brand, writing books, revising books, editing books, and releasing books, this all takes time. It can be a lot of time, or it can be a short space of time, but whichever you fall into (and the majority are in the long time line) just know that it doesn't mean that you might never make it. I know that because slowly, book by book, moment by moment, I am getting there, but the line is moving slowly and I'm inching up, and there is movement, it's just too small to really plot on a graph or something.

There are people ahead of me in the queue who seem to find short cuts, there are people behind me who write an amazing book, and through their own time and effort, manage to cut through a huge chunk of the line. But at the end of the day, neither one of those are me enemy, they're my peers, my colleagues, and trying to sit there and think: well I wrote an amazing book, why can't I seem to jump ahead, isn't going to help you, or anyone else. Jealousy is a beast, and it's real, I'll admit that I've had my own moments, but that doesn't change that these people in the line with you would be cheering you on, as you do them.

I think, sometimes, too much is made of people who seem to be overnight successes, like they wrote a book, published it, and boom, in come the sales and the like. A lot of it is hard work going on behind the scenes that we don't know about because social media is the highlights reel, we all know this and sometimes we seem to forget it when it comes to something that we really wish was happening to us. It's easy to get caught up in the idea that because it happened to them so fast, we are failures as it's not happened to us after one book, or five books, ten, or fifteen, or even twenty. But the important point, the one thing I want everyone reading this to take away is that no matter what path you're on, it takes time, and that's okay.

I've been writing for twenty years. I've been published for almost sixteen, and in the time since I first had my début published to where I am now, I have known some successes. I once sold ten thousand books in a month, and I was over the freaking moon about it, but as the ads stopped and the buzz died down, it slowly petered out, and that's my fault for not keeping up with the ads. I didn't have as many books out back then, I think it was the year I released Lynne & Hope, so only four books out, and yet I did, for a short period, make it, and that worked wonders for me.

But that's the thing about the line, sometimes you get to the front, only to find that you'll make it for a bit, and then, you think the hard work is done, and you get out of line, only to realise that it's nowhere near done, that you have to keep going, and that you have to be patient and keep your eyes on the prize. You will get there again, you just gotta work hard, and keep edging forward slowly, piece by piece, there is movement, and maybe, you'll get a chance to jump further ahead. But either way, you're doing amazing.