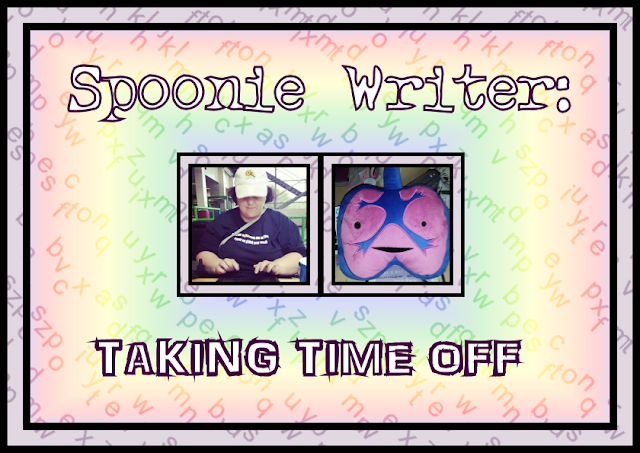 It feels like all the time I'm writing these that I'm always talking about self-care and taking time off, and as you'll have seen if you're a follower of the blog, or even just someone who reads from time to time, I do talk about it a lot. Today I wanted to talk to the fellow spoonie writers in my audience, that doesn't mean that other people can't read as well, you may find that it resonates with you, that it's something you need as well, but sometimes that pressure to keep working is placed heavily on a spoonie because of the way society views productivity and tying it to your worth.

When you're someone who's already struggling with some kind of physical, or mental illness, you're already finding it hard to achieve to the same level as those in your peers who don't have that holding them back. I don't mean that in a negative way, I've been disabled for a number of years and I don't see it as a negative thing. However, the truth is that even though we don't want to 'let our illness(es) stop us/hold us back' sometimes, by the very nature of what they are, they just do. It's hard to accept, hard to live with and hard to explain to people who don't have that hanging over their heads.

Does that mean that we can't achieve our dreams? That we can't do great things? No, not in the slightest, but it does mean that from time to time, while our peers are reaching for this milestone, we're having to take a moment to catch our breath and actually maybe will take a lot of moments, and catch a lot of breaths, because we have to stop. I've talked about this before (piece found here) but stopping and needing a break doesn't make you lesser than, it doesn't mean you don't work as hard, or that you're not as capable of what you're doing, as the person next to you who isn't disabled or chronically ill. It just means that we needed that break, and that's completely okay.

I have struggled over the years at knowing when I'm 'allowed' to take time, when it won't blow back on me, when I won't be seen as lesser because I've needed that time. I get that the public image of me is this writing machine who doesn't let anything stop them, and while some of that is true, there's also the things that I only show in glimpses. I write a lot yes, but I also have a hell of a lot of downtime. I have days, weeks even, when all I can manage is to sit up for an hour at a time and sometimes I use that to write and sometimes I use it for other things. The point is, that even if people see this writing machine, it doesn't match the narrative of what I'm actually feeling.

And that's simply that taking time off can be, at times, seen as less than. In the indie author community we're all about the hustle, about the releases that are upcoming, about the next project, about this and that, it's the same on Authortube, the idea that we need to be creating and reaching massive word counts to be valid. I'm as guilty of it in some ways as other people, in that I do, generally, have a massive word count at the end of the month, but, and here's the crux, I know what it costs me, I know how long I've been doing this and the short cuts I've taken along the way, and I know that it's the reason I'm struggling with stuff now. You can't keep burning the midnight oil and not expect to get burnt in the process.

So when you're in the middle of a flare, when you're struggling, remind yourself that you don't have to be hustling to meet this deadline and that, especially if you're someone who knows that when you crash, you crash hard, because I am finding that more and more that as I keep working, I keep needing to crash, and eventually I will just crash for a long long time. So take those small breaks, and make sure you keep in tune with your body. It's okay to need time, it's okay to need space to breathe, and it is more than okay to take time off completely. You will be stronger for me.

Any questions, lemme know in the comments!