The Trials Of A Crime Writer: Back In The Saddle 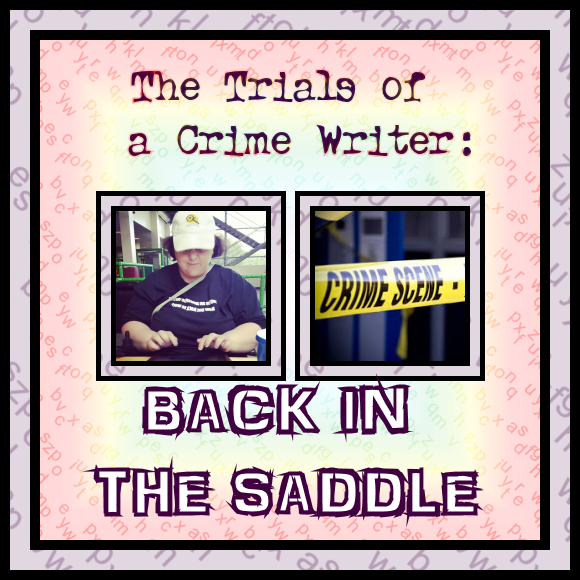 THE TRIALS OF AN CRIME WRITER: BACK IN THE SADDLE

A few months ago I wrote a piece about how I was moving away from crime and mystery stories and wasn't all that sure if I should keep going with this series of advice pieces. (Piece found here) Of course my brain likes to make me out to be a liar because then I got an idea that is, at its core paranormal/mystery. It's the first book in a long time that hasn't been urban fantasy or dystopian and I'm more than okay with that. I've never been a writer who likes to be boxed into one type of genre, and have written a wide array of them over the years.

So here I am, about to start a brand new project and I'm technically back in the saddle of being a crime writer, and I just wanted to talk to you all about it because I'm super excited about getting to write this project. I won't give away any details, I have a 5 facts piece planned for the coming months, but I did wanna just give you some idea of what it's like to have been away from something, only to come back and find that it's just like meeting up with an old friend you've not seen in a while, and picking up where you left off.

I first started reading mysteries when I was a teen, I was never one for Nancy Drew, but I did love Dick Francis and Harlan Coben. My mum would listen to a lot of books from the library on audio while we took long trips, or even short ones, and I'd find myself caught up in the whole idea of trying to solve something before the characters did. I very rarely did, and even now when I read mysteries and crime thrillers, it's rare for me to put all the pieces together before the characters do, and I adore that about the genre.

When it come to writing myself, my first book wasn't a mystery, it was more fanasty/adventure and it was more middle grade than young adult. The first mystery book I wrote myself was Blackout, and in ten days I had the story on the page and was ready to kick off a chance of writing more and more of them, which I did with the Dying Thoughts series, and other books beyond that. I never really, and this is embarrassing to admit, realised about the whole paranormal angle when it came to the Dying Thoughts series, until a lot later. It was when that hit home that I realised I adored that, combining two genres that I love and making it all about the mystery? Oh yeah! Sign me up!

Of course the majority of my books have had some kind of mystery element, even the Lights Out trilogy has a mystery element, as does the Cramping Chronicles series, but this new book will be the first one in a long time where that mystery is the focus of the plot. It's not about other worlds or the dystopian, it's about here, and now, and teenagers thrown into the mess of having to solve some kind of crime before they end up with consequences none of them want to pay.

I adore that kind of story, I love YA and I love writing mysteries and so for me, this kind of idea just spurs me on to want to try and lose myself in my own work. By the time this post goes live, I'll have, most likely, written the first few chapters, and from there it's just about getting to know my main character and the mysterious elements that are following her around. I might even manage to squeeze in a little bit of romance!

So yes, while I didn't write crime/mystery for a while, I'm back doing it now and I couldn't be happier about it! I know that I will branch out into other genres, that I won't stick with just the one because I go where the ideas take me and I'm more than happy about that, but I will adore getting to delve into this new world and see where it takes me.