The Trials Of An Indie Author: Juggling Time & Money 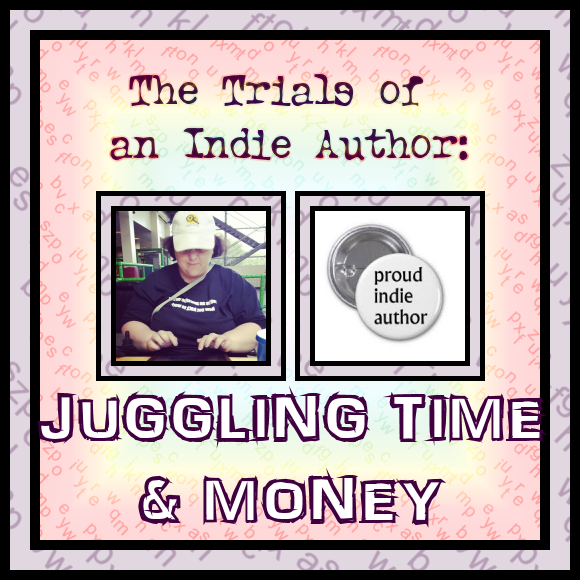 THE TRIALS OF AN INDIE AUTHOR: JUGGLING TIME & MONEY

One thing you learn quickly as an indie author is that you have several things to keep track of, and when going into the publishing world, you have two big things in your back pocket that will help you. One is your time, like how much you can do yourself, how much time you have to dedicate to promotion and marketing, and all the like, and the other, is money. I don't really need to explain that the amount of money you have as disposable income will dictate how you do things.

So how do you work out which is which? I mean if you have a lot of disposable income, you can afford to pay for the more expensive editors, and cover design. You can afford to hire someone to format, and promote your work. And it, usually, ends up paying you back in sales. Though of course that's not a guarantee. If you're someone like me, who doesn't have a lot of spare cash, then you're going to be finding that a lot of the time, the choice is to decide what you want to spend that money on, and what you're going to attempt to do yourself. It doesn't mean that those with more money will do better sales wise, but it does have an impact on how you manage your indie author life.

I learned to juggle the two of these pretty early on. It's one of the reasons that I don't do rapid release, and why I don't just have all the books I've written already edited and out in the public. Part of that is also time, I like to spend a good chunk of time revising and perfecting those drafts and if I was pushing to do it quickly, that just wouldn't be possible. However, there's also a money aspect. I don't have the kind of money it would take to rapid release, going through edits, and covers, and all of that, for about eighteen books all at once. To be fair, I don't think many indie authors do, but mine is the rather extreme example.

There are some things that you can do yourself, and there are others that you need to put the money into, for example, I can format using a template, but I can't edit a book professionally myself, neither can I make my own covers. I have zero artistic skill and they would look terrible if I did that. On top of which, it's just not something I want to risk as far as the editing goes. I've read books that need a good editor, and they do not sit well with me. I also know that I'm not always able to see the forest for the trees, even with beta readers and the like. Sometimes I get all the way to the professional edit, and my editor will say: hey you realise this doesn't make sense? And I'm like: bugger, I missed that, and you're right. Or even she'll point out this ongoing plot point that flew over my head.

I will say that I am getting better at spotting those though, but that comes from experience, and I still wouldn't skip the professional edit, my grammar and such is appalling in my first drafts and I don't want to subject my reader's to that. So when it comes to juggling my time and money, I make sure that the things I know aren't skippable, are the ones that come first in the budget. I have some idea of how much it'll cost to do a developmental editing cycle, I can generally work it out for line edits and proof reading. I know what my cover designer charges, I know what the cost of certain perks for pre-orders cost. I know all of this, and I will factor that into the cost of publishing a book, especially if it's one that I know is upcoming.

And yet there comes the big ole marketing beast. I don't generally have a lot of funds at the end of all of that, so I rely on free, or cheaper, marketing plans. I try to use my platform to spread the word, I try to make sure that I take advantage of any offers and the like, but at the end of the day, there's only so much money I have.

Every year when it comes to a new release, I tell myself to look into the marketing packages for release build up, and every year I do, and realise I can't make it work. That's not to say that therefore that's why I'm not a big name or something, or even to invoke pity, it's to point out that when you're an indie author and the buck stops with you, you have to make some sacrifices and you have to keep juggling those balls in the air, and eventually one or two are gonna fall by the wayside. It happens, and you get better are working out which ones are falling.

So part of being an indie author is working out what matters to you, and what doesn't. You can chose to forgo a release for a year or however long it takes you to save up for that big splash, but at the end of the day, eventually the money runs out, and books are a never ending thing. You are always promoting them, you are always looking to get them in front of new readers, and that never changes. So you choose which balls are going to stay up and which ones are going to end up in the gutter for a while.

Email ThisBlogThis!Share to TwitterShare to FacebookShare to Pinterest
Labels: a book a cat and a cup of tea!, author's life, indie author, Joey Paul, joey writes, the creative process, the trials of an indie author, writer's life, writing goals