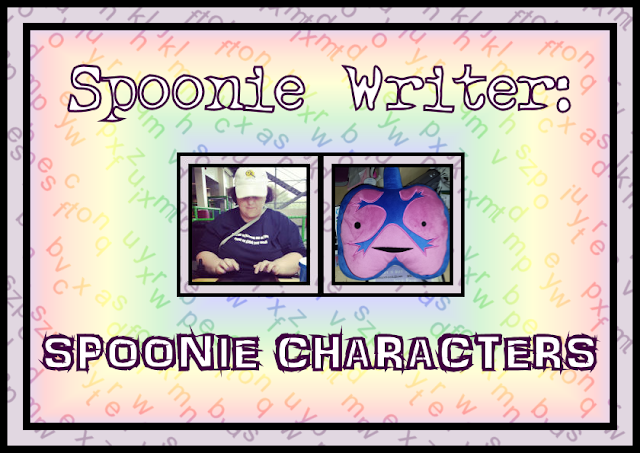 For a long time when I first started writing, I didn't want to write too many spoonie characters. The last thing I wanted to do was pigeon hole myself into this idea that because I was disabled and chronically ill, I should only write about those kinds of characters. I went through a stage of being so sure about it, that I went to great lengths to avoid writing those stories. It was really only in the last ten years of so that I've been comfortable writing about characters like me.

That said, my debut Blackout, did have a spoonie. She wasn't the main character, but she shared my lung condition and it was one of my ways of highlighting that there were people like me out there. I did my first wheelchair user in Lynne & Hope, and there are some disabled characters in the Dying Thoughts series. All of this was me breaking through my own constraints and getting more comfortable writing about people like me, without their conditions and such being the only thing about them.

I'm a firm believer in telling the stories that you want to tell. You don't have to write any kind of way, or any kind of characters, or any kind of story. There are no rules as such. However, I do know that reading non-spoonie authors writing about disability in some way, there have been a lot of cringe moments, and the last thing I want to do is say that only disabled and chronically ill writers should write those kinds of characters, but there does need to be some level of research and sensitivity readers involved.

At the moment I am revising a book that is all about disability and chronic illness, I've used conditions that I myself have experience with, and I've also branched out into things I don't know the first thing about. I did a ton of research, and I also employed sensitivity readers, the book is currently with them now. A big part of writing this story, which is the first in a four book series, was wanting to shine a light on a trope that I felt was never really adequately portrayed before. I won't tell you what it is, because it kinda spoils it otherwise, but it was a lot of fun to play with it, and see how it all turned out.

As a spoonie, when you're starting to play around and write different conditions than the ones you know, you'll find that a lot of it is research, and asking people who do have that condition about the limits they have. A lot of the time it can be as simple as finding symptoms, picking several and playing off those because not every condition works the same way in everyone. You'll still need to do some more research and work out what an actual sufferer feels about the character you've written, and you may find that they spot points where things can be added, or where symptoms can be made clearer and all that goes with it.

I've been editing a book for a while that is about a teenager newly diagnosed with two of my conditions, and while I've been able to use some of my own experience, I've also thrown in some symptoms that I personally don't have much, or any, experience with. It's made for a good series, a good character and with the other things going on in the story, has allowed me to showcase a way of life for people with that condition. I'm also drafting a series that has the main plot point as a teenager with worrying symptoms looking for a name for their condition, and again, it's been interesting to find out along the way how these symptoms will come to light, and what they mean for this character and their story.

You can have a lot of fun with writing spoonie characters, and it doesn't, by no means, have to be the only type of character you write. It's something that I've worried about before, and I'll say it again, you don't have to write disabled/chronically ill characters exclusively because of your own disability. You can if you want to, there's nothing wrong with that, but it doesn't have to be all you write.