The Trials Of A Crime Writer: Adding The Paranormal 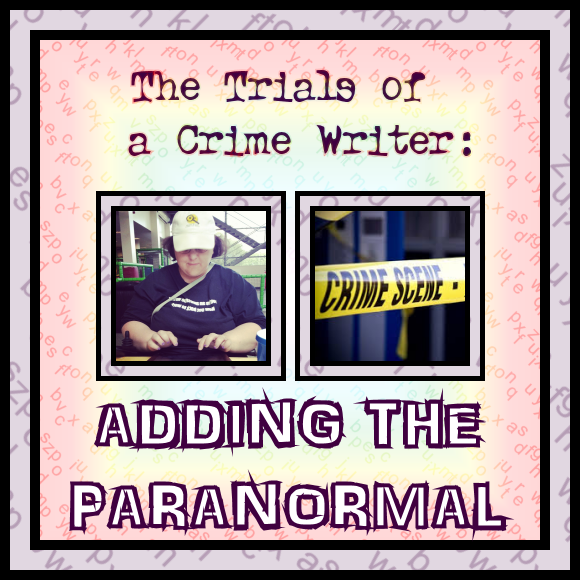 THE TRIALS OF A CRIME WRITER: ADDING THE PARANORMAL

Since I started writing crime fiction, it's been a rare occurrence that it not also include some elements of the paranormal. I don't really know why it started out like this, just that was where the ideas took me. The Dying Thoughts series was my first really big foray into the crime genre, and with it came the fact that the protagonist, Tara, was very much psychic and therefore more paranormal/crime (or mystery depending on who you ask) than straight up crime. I have done some without the paranormal elements, but they're more the exception rather than the norm.

So what do you do when you're wanting to add those paranormal elements to a crime/mystery story? I have a few tips, and I thought I would share them with you today. Bearing in mind that, a lot of mine are going to be related to young adult since that's the category that I write in, but that doesn't mean they can't be tweaked and made into something that works for adult novels as well.

#1 DECIDE ON THE RULES
One thing that's stayed true for all the different paranormal entities I've included in my works, is that you have to know the rules of that world, of that ability, and what it means for the world you're writing in as a whole. Take Tara, she is basically living in our world, only she has a touch that allows her to see the last moments of someone's life when she touches something that used to belong to them. She's the only one that she's aware of and while there is some family history, it's not a widespread thing.

Because this was a rule from the start of the series, I had to make sure that it held throughout the rest of the books. I couldn't have psychics becoming commonplace, and I needed to sell the idea that because of what Tara is able to do, she's an asset to people like, Mike, who believed in her ability. There were some instances of her ability evolving, but again, I stuck to those same rules and made sure that they didn't change drastically from one book to the next.

#2 DECIDE ON THE IMPACT
This is something that you need to keep in mine, after all, why have a paranormal element if it has no impact on the plot, or in this case, the crime itself. It doesn't have to be the driving force of solving the crime, it can be the reason it happened in the first place, but you do need to know the impact, and why it's happening in this world.

#3 LEAN INTO IT
This is something that my editor is always telling me to do when it comes to some central theme to the book, lean into it, explore it, and allow it to grow and bloom and all of that. The same applies when it comes to the paranormal elements, if it's something that's a central theme, make sure that you're exploring it as much as necessary for that story.

I don't mean that you should info-dump all this backstory, but that while writing, you'll find that there are certain parts and themes that will stick out to you. One of the books I'm currently revising could've been paranormal/mystery and I found that it went in a different direction and leaned more into urban fantasy, but while writing and while revising, I've made sure to keep that mystery element, and lean into the themes surrounding it.

So there you go, those are my three tips when it comes to adding paranormal to your crime. Like I said above, it's something that I've been doing for a number of years, and I've found that these really help me craft stories that hold true to the genre and also allow me to get across the plot that I want. I hope it helps you!