The Trials Of An Indie Author: Managing Targets & Goals 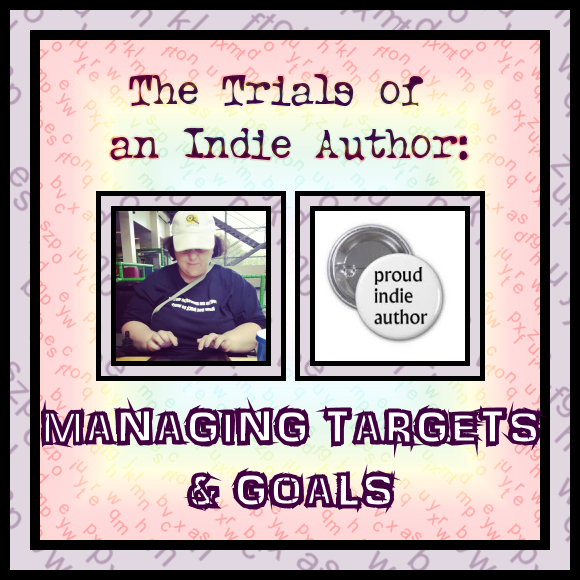 THE TRIALS OF AN INDIE AUTHOR: MANAGING TARGETS & GOALS

Those who have been following me for a while will know that I'm very much someone who does goals and the like. I do them on Authortube, as well as on a private blog, in my planner and all over the place. I'm someone who likes to track words, and pages and chapters, and how many books I read. I do all of this, and it works for me. However, it's taken me a long, long time to be able to get to the point where I am at now, working out what the best goals and targets are for me on any given month. So I thought that I would break down how I manage my targets and my goal setting for you today.

#1 NARROW DOWN WHAT HAS TO BE DONE
By this I mean, don't throw in goals on a monthly basis, if you know that it doesn't have to be done right away. Or if it's something that you can't manage in a month. I will generally break down the goals on a month by month basis. Like I know I want to read 350 books this year, so I'll break that down into what I need to read every month, and every week. The same can be applied to writing. I know that in any given month, I'm, usually, aiming for about 20 chapters and 45K words, so I make sure that I break it down week by week about how much I need to get done.

If you jump in at the deep end and set a goal or target of writing 50K words in a month, and you don't really know what you're going to put those 50K words in, then you're setting yourself up to fail. While yes, you can hop around projects, hell I do the same, but you need to be, somewhat, aware of what you're planning to do with those words.

#2 A TARGET IS NOT THE SAME AS A GOAL
I mean they are similar in that both are things we aim to achieve, but they're not the same thing, at least to me. For me a target is something on a smaller scale, like hitting a certain word count on your projects, or reading a number of books. That, to me, is very much a target because it doesn't really have any end date in sight. If you set the target to get to 10K words, and you manage it, there's no reason that it has to be over a certain time period.

A goal on the other hand is something with a deadline. When I say I want to write 20 chapters by the end of the month, that, to me, is very much a goal. It's something that I am actively working towards the whole time that I'm writing that month. I know where the words need to be project wise, and I know what I'm going to be doing. Goals, I think, go over a longer time span than a target which has a smaller threshold and no end date needed. Like I do monthly goals on that private blog, but I also do bi-monthly ones on my Authortube channel. They are all specific to a time period and I make sure that I keep trying to tick them off.

#3 BE SPECIFIC WITH BOTH
I say with both because there's no good have a target or a goal where the end result is a hit or miss as to whether you reach exactly what you initially planned to. Like if I say I'd like to finish a book this year. I take that to mean do a first draft, but others could take it to mean have the book ready and out by the end of the year. It's different context for everyone and so you gotta be specific when you talk about hitting your targets or goals. It might even be that you personally change you mind about what the end result was, and then you're either making it too hard on yourself, or not hard enough.

So always remember to be specific with both because if you're going to be working on them, you need to know what you, the person making the goal, wants the outcome to be. There have been times when I've made a goal and called it done, when actually I realise that it changed at some point in the time between starting and finishing.

#4 GOALS AND TARGETS AREN'T SET IN STONE
Coming off that last point, you don't have to set things in stone. Life and other things will have an impact on you. It might be that you end up going through a period when you can't do something, and because of that you end up behind on your goals. True, you can try and make it up, but using NaNoWriMo as an example, the words missing pile up quickly and it makes it harder and harder for you to reach that end results.

So if you find that you're struggling, don't be afraid to change that target or goal, and remember to be kind to yourself. Don't set yourself up to fail, and keep going.