Review of Everything I Do by MC Frank 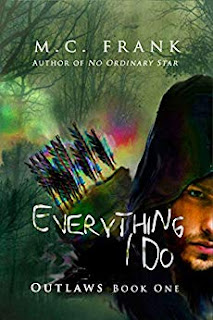 Robin Hood is about to steal your heart.

A robber and a princess.
A girl disguised as a boy.
A medieval reimagining of the legend of Robin Hood packed with adventure, sacrifice and romance.

Robin Hood, hidden deep in the Sherwood Forest, is fighting to restore the crown to its rightful king, surrounded by faithful friends, green leaves and clear skies. Burdened with secrets, betrayal and an incredible responsibility, he struggles to stay alive and keep the starving people fed. One day, a boy saves him from the Sheriff’s poisoned arrows. Robin, impressed by the slender youth’s courage and skill, takes the boy with him to the forest.
Only, the boy is not a boy.

In the castle of Nottingham, a maiden who used to be a princess is forced to obey the wishes of a tyrannical Sheriff. She dons on male clothes and trains to become a fierce assassin, vowing to catch the greatest criminal in the kingdom. But when she saves Robin Hood’s life nearly losing her own, she is rescued by the outlaws.

When Robin and the “boy” meet, two worlds collide, resulting in unimaginable danger and intense romance. Who will survive when they learn each other’s secrets? What happens when the assassin falls in love with her victim?
Amazon

My review: 5 stars
I picked this up because I adore Frank's writing and the worlds she creates. This had been a long awaited release and I dove into it the day it was released. The story picked up from the first word, a mysterious stranger saving the life of Robin when all hope is lost. I loved the imagery, the writing, the prose, the way the story moved from Robin's point of view to the boy who is not a boy. I was hooked from the first word and couldn't stop reading until late into the night. And that ending almost killed me! An amazing book from Frank and one I very much recommend!