Review of Conscript by Pamela Stewart 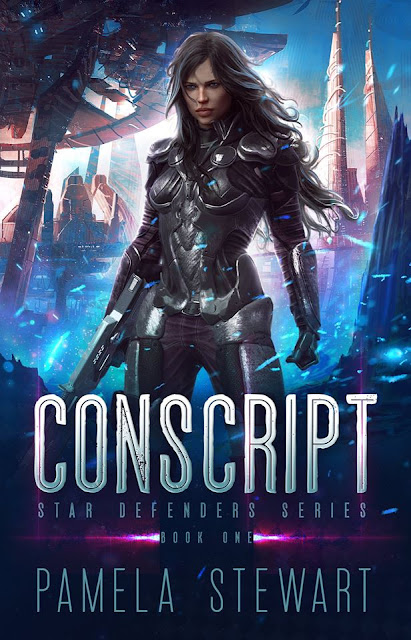 Conscripted and forced to fight for her life.

Seventeen-year-old Vega Volante was almost done with her mandatory service to the Axis government. Everyone had told her it would be easy--in and out.

Then, the hostile aliens invaded.

Now, she slaves away training and retooling a mining ship for war as part of the Star Defenders. All Vega wants is to get home to her family. So, when a chance at officers training opens up, she jumps at the opportunity for more freedom. But there are only five slots, and Vega must use all her planetborn skill to fight for her place.

As if that wasn't enough, the ship's condition continues to worsen. "Accidents" may not be accidents. The lines between friends and enemies blur, and Vega realizes there's a lot more at stake than her chance at freedom.
Amazon

My Review: 5 STARS
I picked this up because the blurb sounded interesting and that cover is amazing! I'm not usually a bit sci-fi reader, but this was an amazing book and pulled me in on the first chapter. Following Vega through her conscription, through finding out what's really going on on the ship and everything else that goes with it. It's beautifully written and will make you love the characters, even the ones that seem unlikable! I very much enjoyed it and will be looking forward to the next in the series!

Join Joey here on the blog on Fridays for interviews, reviews and guest bloggers. If you'd be interested in doing any of those, you can contact Joey here.
Posted by Joey Paul at 07:40