Review of The Loner by Alex Villavasso 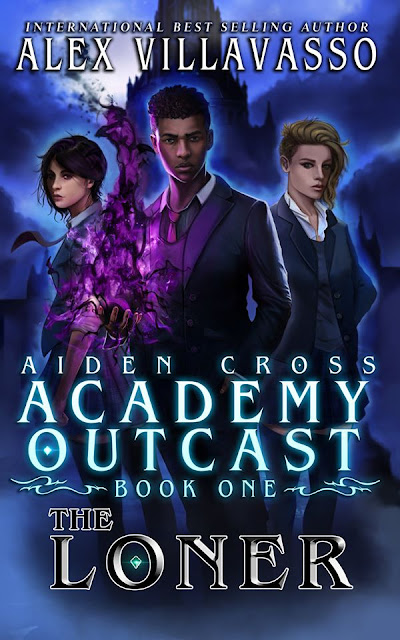 I always knew I was different, but I never knew why. My name is Aiden Cross, and if you asked me a month ago if this type of thing existed, an academy for the exceptional, I’d call you a liar.

The supernatural exists, and apparently, I’m one of them. It’s in my DNA, just like all of the other students here at the academy.

I thought it was cool to be around others like me, but it turns out that this school is like high school on steroids. Having powers just makes things worse.

There’s Tristen, a pyro, who bullies me every chance that he gets. His powers are more developed than the rest, so he has no problem pushing me around. If that wasn’t enough, his goons also join in on the fun, especially when Kaci is around. I like her. I think she’s amazing, but I’m pretty sure Tristen likes her, too. And who wouldn’t? She’s smart, funny, resourceful, and can move things with her freaking mind.

It doesn’t take a rocket scientist to figure out why sharing a crush with your nemesis sucks. Him showing off usually means me looking like a loser, and I already have a hard enough time as it is fitting in.

And then, there’s another girl, Summer. A literal ice queen who does whatever she wants, whenever she wants. Her parents picked her name as a cruel joke, because anything bright and sunny is like death to her, and to be honest, I don’t even know how she’s still at the academy. I’m sold on the idea that she high-key hates everybody and everything, but we always seem to cross paths at the worst times.

Which…yeah… (Is her hair really jet-black? She has to dye it, right? That’s not natural, right?)
Anyway, my classmates aside, the academy is full of its own challenges. The classes are tough, the exercises are brutal, and to top it off, I’m at a major disadvantage because I can’t access my powers at will, and I'm in the advanced courses.

I’m doing my best to stay afloat, but Tristen isn’t making it easy. The academy is fast-paced, but I still have other things to focus on besides academia, like why I was attacked before I came here and the true nature behind my abilities.

And don’t even get me started on dealing with the wild things that pop up at any given time on this crazy campus.
Amazon

My Review: 5 STARS
I picked this book up because of the blurb and the cover. I adored Adien and his story, it was engaging and pulled me in from the first page. His journey through finding his ability and everything else that the academy threw at him, was amazingly written and beautifully crafted. It was a quick read because once I started, I didn't want to put it down. I adored the book and will be looking forward to the sequel! Highly recommended!

Join Joey here on the blog on Fridays for interviews, reviews and guest bloggers. If you'd be interested in doing any of those, you can contact Joey here.
Posted by Joey Paul at 07:03