Review of Power Up by Aella Black 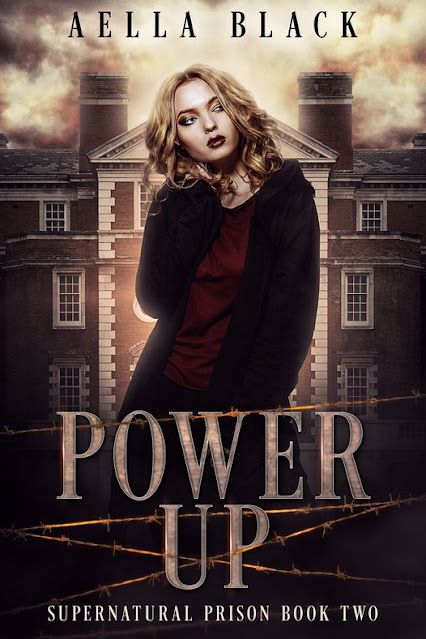 Out of the frying pan into the fire…

Xander Aldrich’s life has been upended in ways he never could have imagined. Tossed in prison. Then thrown in another one. Falling for a girl he’s known his entire life.

What is new is Lansing’s warden, along with the unquestionably barbaric game she’s playing. Xander has no idea what the objective is, but he has no intention of letting her win.

Though Xander still sees most of the friends he’s made behind bars, he often doesn’t see the one person he wants:  Phoebe.

She’s made friends at the new prison, and one, in particular, gets under Xander’s skin. Whether it’s due to the guy’s close proximity to her, or their increasingly close relationship, Xander has yet another reason for them to escape captivity.

Good thing he’s always up for a challenge.

Phoebe Atkinson’s ability has made her a target since she first entered the supernatural prison system. Her arrival at Lansing ensures the target on her back is now bigger.

With new inmates to contend with and a complicated new warden, Phoebe tries to find her way without the help of many of her friends. One, in particular, she misses more than the others:  Xander.

They may be trapped in the same building, but she’s never felt further apart. In a place where it’s often every man for himself, not having him near is even harder.

But there’s been a void in Phoebe’s life for the past year, and it has nothing to do with Xander.

That doesn’t mean he can’t help her try to fill it.

I read the first book, and was desperate to dive into the second. From the first page, I was hooked on the story, wanting to know how Phoebe and Xander would manage. The story is engaging, enthralling and takes you along for a hell of a ride. Black has a way with words that paints a vivid picture and you don’t want to ever look away. I ended up flying through this book in one sitting, desperate to know what happened next, and leaving off with the ending, I am desperate to read book three and find out how this series ends! Overall, an amazing read and one that I recommend!