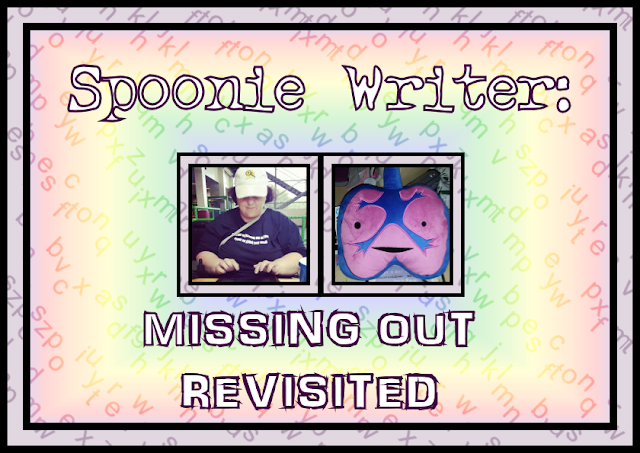 I've talked about missing out as a spoonie writer before (found here) but today I wanted to revisit the topic because of things going on with me as a writer, and as a spoonie. For those who don't know, I'm chronically ill and disabled, and so I juggle both my health and my writing and try and make the two work, when sometimes it's just not possible.

At the end of 2020, I was in a depressive low, and now in the start of 2021, I'm only just starting to see the end of that low. I'm finding it harder and harder to keep myself focused and on track with edits and writing, and revisions and releases, and so I've been weighing up the option of just doing one release this year and maybe one release next year and then re-visit the idea and see how things go. I'm still, as of now, undecided but it brought to mind the reasons for that.

See, one thing I learned early on when I got sick was I was going to miss out on things my abled, and well, friends weren't. I wasn't going to go out to the club, or pick up a partner, or get married and have babies, not just because of my disability but because of the effect it had on me. And I was mostly okay with all of that. I had my friends, I had my family, and I was okay with the adjustment that I'd made. When I was published, it felt like I was going to have this career that would adjust with me, and mostly it has.

For the past four years I have gone from publishing one book a year to at least two, though in 2019 I did three, and that about killed me! I love being able to bring out the two because then I'm always preparing for the next one, and with how fast I draft, I'm not going to run out of books to release. On top of that, my audience is excited and happy about the two books a year and I've been getting a lot of good feedback on the way I do things.

But it's 2021, and while Lights Off is coming out in June (you can pre-order here if you're interested) I should be, at this point, sending off Cramping Chronicles: The Second Pang to the editor, and I don't know that I will have. I don't know if I have the mental energy to do a second release this year, it's a long process, it takes a lot of work, and with my mental health taking a sharp nose dive, I just don't know if Im able to go through that process without it having a negative effect on me long term.

And then the whispers of missing out come, because I look at other indies in my genre and they're releasing either rapid style (which I know I can't do) or they're doing their usual thing and taking things in their stride and me, I can't right now, and it's just hard to adjust and cope with. It's hard to mourn that. Someone pointed out that one of the highlights of being indie is that you get to decide when and what you do, and that's true, but I feel like there's this expectation, and that I would be letting down my readers to push things back, especially when the book itself is, mostly, ready to be edited.

The problem is, right now, I don't have any advice about what to do when that happens, other than to accept it, and move through it at your own pace. I've been struggling for months, and am only just coming out of my shell enough to tell myself that it's okay if I need to take that break, if I need to spend some time away from publishing to get my head on straight.

I will be the first to tell you that taking a break is not a bad thing, that everyone needs them and that there's no shame in doing so, but like a lot of people I'm great at seeing the issues other people are having and telling them to take care of themselves, and not all that good at recognising it in myself. I don't feel burnt out, it's not that kind of problem, it's the pressure and stress and the fact that my confidence has been slowly chipped away at to the point where, right now, I don't have any when it comes to writing and publishing.

Maybe it will help to talk to myself as if I were someone else, and maybe writing this piece has been what I've needed to know that it's okay to take that time, to heal, to breathe, to move past this blip and go forward onto something else. Whether that's this year or next, there's no rush to get published, I have the time I need, and if not, I can make that time. I need to heal, I need to grow, and I need to get back to the person I was before all of this.

I hope my readers will understand.