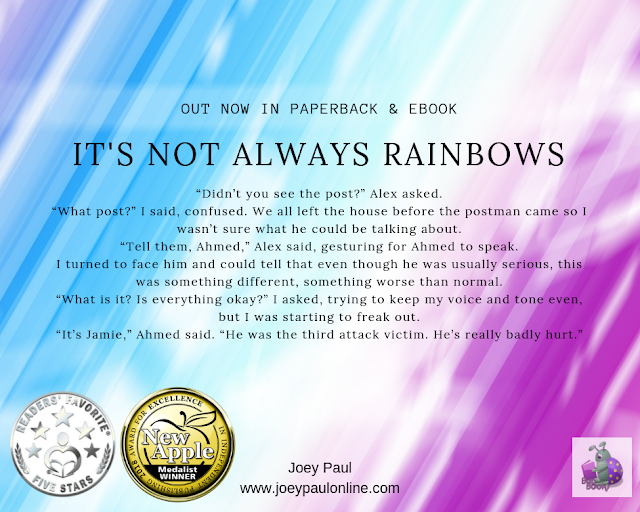 Cat's community is being attacked and she doesn't want to let it go...

[ID: A light blur bleeding into purple stripes with the title IT'S NOT ALWAYS RAINBOWS at the top and Out now in ebook and paperback just above the title. The except reads:

“Didn’t you see the post?” Alex asked.
“What post?” I said, confused. We all left the house before the postman came so I wasn’t sure what he could be talking about.
“Tell them, Ahmed,” Alex said, gesturing for Ahmed to speak.
I turned to face him and could tell that even though he was usually serious, this was something different, something worse than normal.
“What is it? Is everything okay?” I asked, trying to keep my voice and tone even, but I was starting to freak out.
“It’s Jamie,” Ahmed said. “He was the third attack victim. He’s really badly hurt.”

Email ThisBlogThis!Share to TwitterShare to FacebookShare to Pinterest
Labels: a book a cat and a cup of tea!, author's life, book: it's not always rainbows, image description, indie author, teaser tuesday, writer's life