5 Facts About My Planning Process 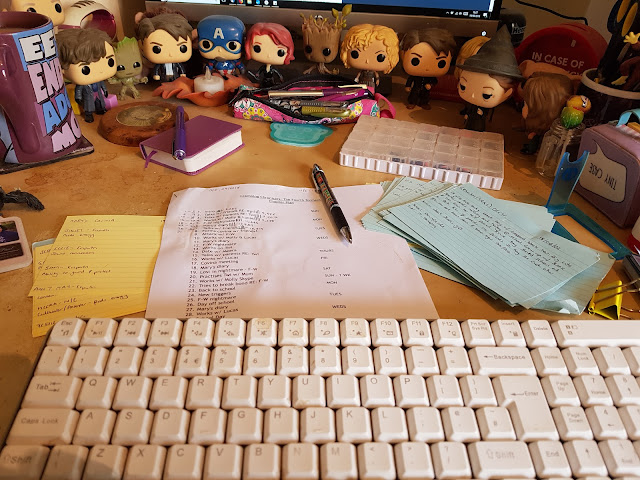 5 FACTS ABOUT MY PLANNING PROCESS

I've done a five facts series about the whole of my writing process, and I thought that I would do one about my planning process too! I really enjoyed doing the five facts, and they were really well received so I thought I would expand on them. Just a quick little bit before I get started, I am what people call a plantser, in that I do both planning, and a whole lot of pantsing/discovery writing while drafting. I'm very much a planner when it comes to the revision process, but beyond that you're not going to find any strict planning stuff in these facts and if that's what you came for, sorry, just not gonna find it here!

FACT #1: I START WITH MY CHARACTERS
When I first have my idea, I might not have any idea about the plot or the location, but I will always, always, have some characters in mind. It's usually the main character and I'll flesh them out both in my head and on character note cards. I want to know what they look like, what their flaws are, where they stand with the plot, when it comes along, and all the rest. If I don't know any of this, I find it really hard to get any ideas for the plot because I don't know the characters who'll be driving it along.

FACT #2: I ALWAYS MAKE A PLAN
I don't think there's been any book I've written in the whole of my career where I haven't had some kind of plan. While yes, the earlier ones were a lot more bare bones than the ones I make now, they were still very much present during the writing process. My plans are very simple, I got by chapter and I have the day of the week, the POV for the chapter (if needed) and a few words that summarise what I want or think will happening within the chapter. It's been that way for so long that I pretty much know how to write them all out and the like.

FACT #3: I ALWAYS ALLOW FOR SOME WIGGLE ROOM
By this I mean that some of the chapters in the plan will be something like: school day. These help me keep track of the days of the week, but they also allow me a little wiggle room if something were to happen in the previous chapter that spills over. I'm not, usually, needing to go into detail of what happens at the school, and in the day, so it's a way for me to build in buffer because like I said, I do discovery write a whole ton when it comes to the first draft. It's my way of making sure that I have space for said discoveries without having to go off plan completely.

FACT #4: I BRAINSTORM A WHOLE LOT
When I make the chapter plan, sometimes it's good to go from the first try, other times it needs more time to cook as it were. When I get an idea, I'll write it down in my ideas document and I'll refer back to it a number of times to try and see if I have any new sparks that will help me work out the story, the plot, the characters and such from my notes. I'll do a whole ton of brainstorming, and while it usually happens during the planning phase, it can happen during drafting, but since it's an integral part of my planning, figured I should include it here.

FACT #5: I RARELY RE-OUTLINE DURING DRAFTING
By rarely, I mean that I have done it once or twice, but usually I find myself going off on tangents and guiding myself back to the plan. It can lead to difficult revisions, but it works for me enough that I don't ever really stop, re-outline and print off a new chapter pan. I find that doing it this way allows me to move the story along in other ways, and like I said when I started this piece, I'm not really much of a planner. I used to think I was, but now that I've seen more of other people's plans, I realise that I am very much not, and I'm okay with that.