Review of Jade, Daughter Of The Wasteland by Stephen JC Andes 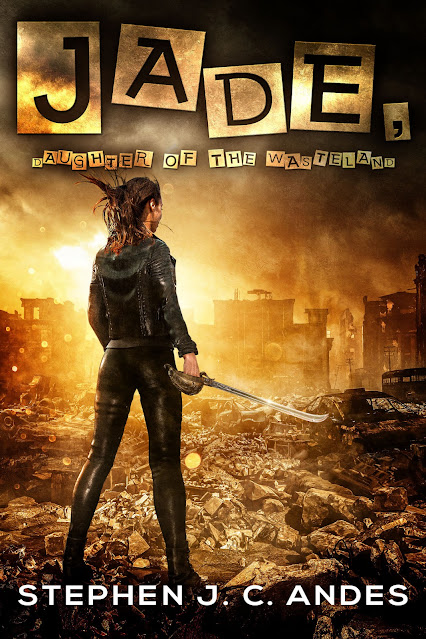 They called it the Twitch. It decimated the world’s adult population and forced survivors to endure the savage dangers it left behind. But that was fifteen years ago…
Headstrong, sword-wielding survivor, Jade, wanders The Wasteland in search of her kidnapped brother. Her quest pits her against feral children, diseased Twitchers, and plague-mask wearing warlords bent on reclaiming their rule, all for the sake of reuniting her family.
With the aid of The Librarian, the de facto ruler of the Wasteland, Jade uncovers the truth about her brother. She must confront her past and face hard choices about those she loves and those who demand her loyalty. When new violence and bloodshed threaten to destroy The Wasteland, Jade must choose her side wisely. Will she die in battle when the war comes to the Library? Or will she overcome her past and seize her role in rebuilding humanity's future to rise as a daughter of the wasteland.

I picked this up because both the blurb and the cover called to me. In the times we live in, I worried it would be a bit too much virus dystopian, but actually found I was pleasantly surprised. There were elements of the story that talked of our times, but it soon became clear this was another kind of story. I adored Jade and all the other characters, falling in love with Andes story telling. The arcs, the character growth, the world building and everything else within the book were excellently crafted. I would love for there to be more in this series, and as a lover of apocalyptic stories this hit the spot nicely. Very much recommended!