Tracking My Time & How It Works For Me 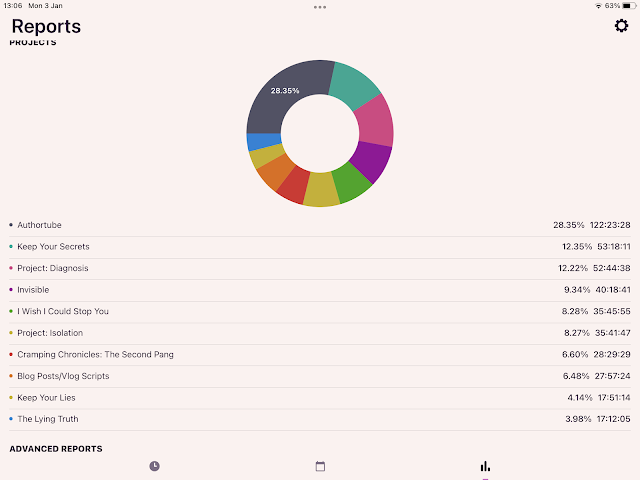 TRACKING MY TIME & HOW IT WORKS FOR ME

I have been using the Toggl app for the past two years, and while I've not yet released the stats for 2022 (the one above is from 2021) I plan to do that on my Authortube channel in February. It's something that I fell into when I first got my ipad. I wanted a way to track my writing time, and then went through a few apps until I found Toggl and was very happy with it, and so have stuck using it.

The reason I started was more because I wanted to know how long things took me. I was starting to get into a paper planner, and just wanted to know when I was planning, just how much was possible for me to get done in the small timeframe allowed by my body before it gives up for the day. I found that I could, easily, do my chapter a day, and could also have a few days a month to do videos and revision, but would need two days to manage to do blog posts and vlog scripts for the month ahead. It was because they require a bit more brainpower and to try and do them both in one day, I would end up stressed and anxious and it just did not go well.

Last year I did a video breaking it all down (which can be found here) and like I said above, I plan to do the same this year for those who love the stats and numbers of writing and the indie author career. I will say that I am far from the norm, simply because I have the other drains on my time, such as hospital visits and resting time and the like, but I am someone whose full-time job is to write (even if, for the sake of transparency here, I don't get paid enough for it to be my only source of income).

Having those stats at the end of the year really does help me set myself up for success when it comes to both planning my time, and also working out what's feasible for me to manage in a month. Like I know that if I set aside days just for revision, I can, usually, manage to get through a draft in a month. I also know that when it comes to the professional edit (something I don't track for reasons I'll get into in a moment) I will have less time to be able to write, record and do all the admin stuff, because that's going to take a huge chunk of time to get done in the mornings.

So going back to what I don't track, why do I track some things and not others? The answer is simple, I can't adequately do so. Like I don't track time in the professional edit because I know that the way me and my editor work is to do the corrections, and chat about this and that. It would be a massive spike in the time spent, because it would vary from day to day what we were also chatting about. I also don't track things like making social media images, and posting and all of that either, because while those numbers would add up eventually, they are, again, hard to track, and I think that I would end up with a skewed result at the end of the year and it just wouldn't feel right to me.

But does tracking my time work for me? Yes, it very much does. It's not just about the pretty pie chart, but allowing me to see if something takes me longer than usual, and why that might be. It allows me to adequately plan my time, and it also helps my anxiety when I'm feeling like I don't have enough time to get things done, I can look back at past numbers and know that, hey I can do the majority, if not all, in the time I do have. It's been a stress reliever for me, and while it might not be that for everyone, and I don't recommend everyone does it, it works for me and I'm happy with that.

For some writers, having a ticking clock would just make them feel worse, for me, it's a relief, it's something I enjoy doing, and it's something that calms me down on mornings when I've slept later than planned and think I have to rush through things. It's calming, and I very much get that it won't be for everyone. But if it's something you do want to try, I do recommend Toggl, I don't have the paid version, and it works perfectly for my needs and there is that pretty pie chart and break down, which just makes it all the more fun.