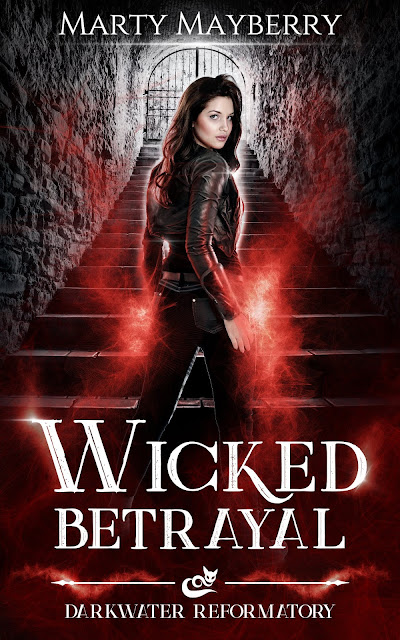 Nothing beats being locked up in supernatural juvie. If only murdering the guy I'm falling for wasn't my only way out.

Framed by the head of the Seeker's Guild and sent to Darkwater to serve a life sentence, I'm doomed. The prison is located in the fae world, on an island in the middle of a forbidding sea. Wizards sent there never return.

The moment I arrive, I'm forced to take a series of initiation tests with a snarky, too-hot fellow inmate. If the creatures trying to kill us don't do him in, I just might. Yet my birth father's at Darkwater, and while he could be the warden, a guard, or a fellow inmate, I'm determined to track him down. He stole something from me when I was a baby, and I want it back.

Once I get what I came for, there are two ways out. Survive the Challenge--another series of trials that take place in the ever-changing, magical catacombs beneath the prison, and they'll send me to pre-release at Darkwater Reformatory. Or I can fulfill the secret blood bond I made with the Master Seeker. Eliminate a fellow inmate and the Master Seeker will transport me home.

...Except the inmate I must kill is the wizard I'm falling for.
Amazon
My Review: 5 STARS
I picked this up because of the cover and blurb and dived right in, getting lost in the world and the characters. Tria is sentenced to life in prison, but she’s there for a reason, one she’s sold on and another she’s been forced into. I read through this book in one sitting and couldn’t help but be amazed at the world building, and the thought that went into all of it. Overall, a quick read for me, but leaves me wanting more, that ending made me wish there was more to the book, and I’ll have to keep an eye out for book two! Recommended for all those who love the fantasy and paranormal!
Join Joey here on the blog on Fridays for interviews, reviews and guest bloggers. If you'd be interested in doing any of those, you can contact Joey here.
Posted by Joey Paul at 06:00