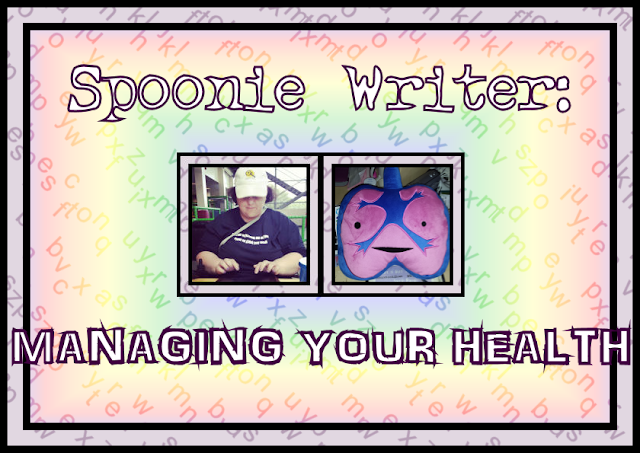 This is something I've talked about a lot before (pieces found here and here) but I'm coming at it from a different angle this time. I don't know whether I've mentioned before on the blog that I have a benign tumour in my left ring finger, and have done for a long while. It took a lot of time before I switched GP surgeries and they finally were willing to fight for me to get the tumour identified and taken out. That was over a year ago now, been scanned and all the rest, and we know it's a giant cell tumour and it's been causing a lot of nerve pain in both my left hand, and from what the surgeons tell me, also my right.

Anyway, with the back story done, I thought I would explain how managing your health as a spoonie writer can put up a lot of roadblocks that you're not used to. The pain from my tumour is quite debilitating and the tumour itself is growing and making it hard for me to use my left hand. I'd been told it wouldn't be too long a wait in January and then in March, surprise plague hit and no one knew when they'd get to it. Thanks to aforementioned awesome GP, I am now finally going through the pre-op process and will hopefully be getting the surgery this month, though you never know with the NHS, and the plague.

I can cope with a lot of things with my health, and have done so, but one thing I couldn't cope with was suddenly having to learn to type using less of my left hand than before. I had to cope with needing pain meds and maxing out on them and still being in a lot of pain. I had to cope with the lack of sleep, and mixed up schedule because the pain drains me and my sleep was never usual before. And all of that has come together with this whole new way of managing my health, of managing how I stay ahead of deadlines while also not pushing myself to breaking point.

And to be honest, I've been pretty close to breaking point this last year or so. I've had to find ways to do my work and then be ready to crash out the rest of the day because of strong pain meds. I've had to be told that there's nothing more they can do, other than remove the tumour, because of my already fragile health. And it's soul destroying and difficult, and it's just a finger, y'know? At this point, the fact that I may lose sensation in that finger doesn't both me, I just don't wanna be in this much pain all the time.

So how have I stayed on top of things, like editing, revising, drafting, and release deadlines? A lot of it has been down to how I've managed my time. I do the majority of my work first thing in the morning. I don't know if the need to not be sat up is down to the tumour or just because my other conditions wanna have some part to play in this mess, but since I know that I won't be able to sit up for long, and I know that once in bed, I will need meds at some point, my focus has been getting the chunk of work done in the early, early morning.

This might not work for you, you might not find yourself able to do that, and that's okay. My point is that there will be curve balls thrown at you and all you can do is adapt, adjust and keep going forward. It sounds so easy and yet I know it's not. I know that I didn't expect the lump in my finger to turn into this nightmare, because for a long time I was told it wasn't an issue, until I changed GP and then well, it was something that needed serious attention.

So while the surgeons have said that they'd like to fit me in during September, I don't know for sure that's going to happen. My hope is that when I sit down to post this blog (since I'm writing it at the end of August) I have a surgery date or at least some idea of when it'll happen. I'm going through the pre-op process now which means that I just need bloods, and a review from the anaesthetist and then I should be cleared for surgery. We can only hope.

What do you do when life throws you a curve ball? Lemme know in the comments below.

Follow Joey here on her blog, or on Facebook or Tumblr to be kept up to date with the latest news regarding Joey and her books
Posted by Joey Paul at 06:21