Review of Twisted By Time by R.L Perez 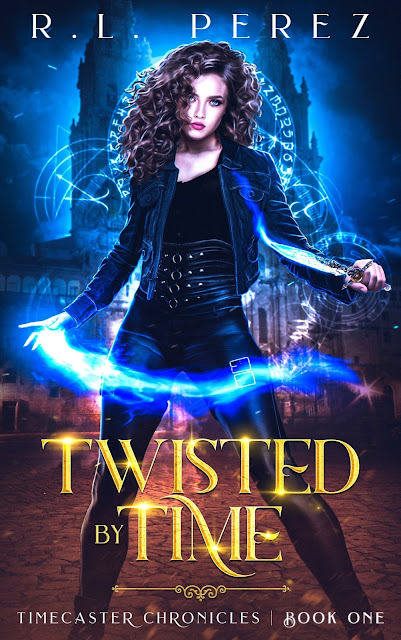 A fall through time. A reckless witch. A war of monsters.

17-year-old witch Desiree Campbell tries to cast a spell to go to Miami for spring break.

But she ends up in Cuba a hundred years in the past.

The year is 1898. The Spanish-American War rages. Demons thrive in the city, preying on humans. Desi is caught between the war of mortals and the war of monsters.

She meets Oliver Gerrick, a handsome American soldier and warlock. He offers to help her fight off demons and find a way home.

But the path to returning back to her own time won't be easy. Demons attack, hungry for blood. And Desi suddenly finds herself targeted by a powerful demon lord.

He knows she's time-traveled. And he wants to keep her trapped in 1898 forever.
Amazon
My Review: 5 STARS
I picked this up because the blurb and cover called to me, and I was desperate to start it the day it was released. A witch who has no plans on doing anything with her life but ballet, ignoring everything to do with her witch heritage ends up making a mistake with a spell, and trapped in the past in the middle of a war. I adored Desi from the first few chapters, and as the story went on, I was hungry for more. The characters were all well rounded and engaging and the story fast paced and leaving you desperate to know what happens. I will be looking for more by this author, and reading more in this series when they come out. Overall, a great read and one I recommend!
Join Joey here on the blog on Fridays for interviews, reviews and guest bloggers. If you'd be interested in doing any of those, you can contact Joey here.
Posted by Joey Paul at 06:43