Working With A Planner - The Creative Process 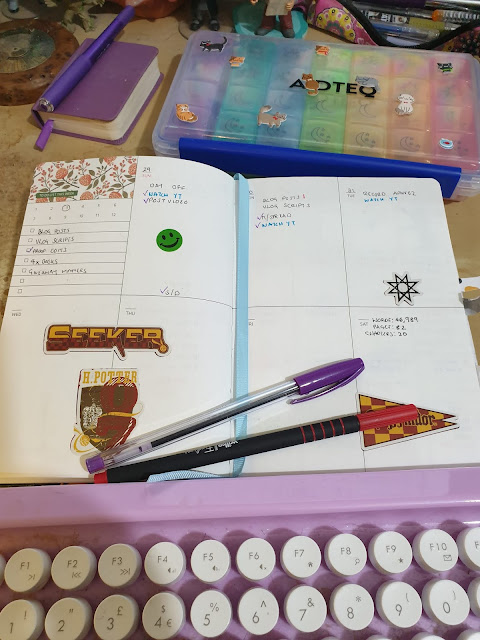 WORKING WITH A PLANNER

I have always been someone who loved to organise. It was the way I did my exams as a teen, and again as an adult. It's how I function and how I work, and it's just my process for working through things. If I have a plan and am organised, then things can't go wrong, and if they do, I'll have a plan for that as well!

However, I haven't, really, since starting writing ever been one for a planner. I loved the idea of a bullet journal, but my artistic skill is zilch and it just doesn't appeal to me in that way. I saw a fellow authortuber with a flowery planner, and I had to get one. Up until that point I had been using the sticky notes app on my computer and it was starting to get glitchy so I didn't want to have to fight with it every month when a planner was a lot easier, and more able to be carried around.

I got the planner in February, it had been a birthday gift from my mum, but arrived late, and then settled down to use it for the first time in March, and boy, I was in love. All the stickers, all the coloured pens and all the ways I could reward myself with getting things done, and track how many books I read as well as my usual count of chapters, pages and words. It opened me up to a whole new way of planning, and I have to say, over six months later, I will be keeping this system for as long as it works for me. I've already ordered next years planner since it'll take a while to get here.

So why does it work for me? I think it's because it allows me to look ahead at the coming months and pencil things in, it allows me to keep a plan both on my ipad and on the planner itself and to see what the week ahead is going to look like without the need to worry too much about whether the app would glitch and lose my notes. I still use sticky notes to keep track of things like post orders for blogs, and my Friday posts, and authortube. I also have a long note with all the publishing deadlines for the next seven years (yeah I know I won't need all that but it calms me, don't judge!) and another that has big things that need to be done soonish, but not right now.

And the planner itself allows me to keep track of appointments and bills, and other such things. It lets me break down my goals on a monthly level and then again on a weekly one. I have the pretty stickers and the pens in colour co-ordinated fashion depending on the project, and I also have the ability to move things around if needed. It doesn't need to be messy, but it can let me look ahead on a yearly scale, which was something I didn't have before. I always had a vague idea of when things would happen, but like that seven years of publishing, I can keep track of deadlines that way, and it's all either in the planner for that year, or on the ipad calendar for the upcoming year.

All this time I thought that I would never be able to find that I wanted - a planner that I could use one month and not the next without worrying about wasting the pages. Because the Flowery planner isn't dated, (and it has space for 13 months) I don't have to worry about if I skip a month or something. It's just opened up a whole new world to me that before was out of my reach.

Working with a planner has been amazing, and I did a whole video on how I plan, which I will link here. Overall, it feels like when people ask me how I manage to be so organised and such, I can point them to the planner and actually show them rather than not really knowing how to explain it. Planners are awesome, and if you use one, lemme know in the comments below!

Follow Joey here on her blog, or on Facebook or Tumblr to be kept up to date with the latest news regarding Joey and her books
Posted by Joey Paul at 05:11