The Trials Of A Crime Writer: Search History Revisited 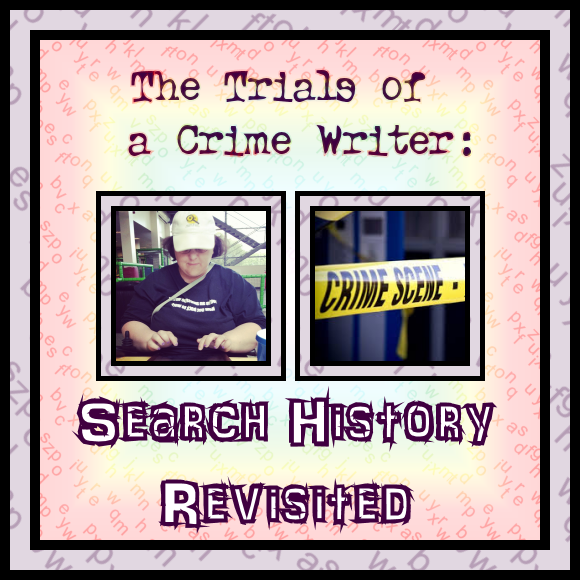 THE TRIALS OF A CRIME WRITER: SEARCH HISTORY REVISITED

I talked about this before (piece found here) but it was a hell of a long time ago, and so I wanted to revisit the subject because things have changed in some ways, but are the same in the others. You know those youtube videos where someone famous answers the most googled questions about them? It's kinda like that, but for my search history it would be everything from magic usage and systems, to the best way to degrade bone marrow, and how quickly one would die if bitten by this particular venomous animal.

We, as writers, always joke about the fact that we're probably already on some list somewhere, and it's most likely true that there are some searches that ding the bell at whatever agency and draw attention from the sneaky eye of the government. Personally, I don't think I've ever searched for anything *that* bad, but it did remind me of a story from way back when the internet was super slow, and didn't have the powers of Google like it does now, and I was writing my début, Blackout.

Before I continue I just wanna say this will contain no spoilers, but there might be hints of what the book is about so if you don't wanna know, then it's better to click off this post, scroll down or what have you and move on.

So picture this, a young nineteen-year-old me is trying to work out just how much of a certain medication someone would have to ingest for them to end up in serious medical trouble. I didn't have Google, but I did have a very understanding and patient lung consultant who was called Andrew. (When you see a doctor as much as I saw him, you skip the formalities!) He knew that I was writing, and I was going through a particularly bad period with my lungs and pain issues. I wasn't yet in the wheelchair full time, but it was the start of me needing one.

So I went to my appointment, still mulling this question over, and we went through the normal stuff. How I was feeling, whether I had any issues with meds, and things like that. And just out of the blue, I opened my mouth and said: "How long would it take to die if someone took enough X?"

He was silent, but his eyebrows raised and he looked seriously worried. I was oblivious and carried on.

"I mean, if I gave someone a high dose of X, would they die slowly? Is it possible they might flounder for a bit? What if I got them medical treatment? Would there be a protocol for that?"

Andrew went from panicking that I was suicidal to suddenly wondering is I was homicidal. He stuttered something, open his mouth to say something, but I had more to ask.

"I just mean in broad terms, I don't need to know the exact dosage, it's not like the character will have access to that kind of information either. But with me as the author, I kinda need to know how much is too much."

Andrew burst out in laughter. "This is for your book??"

"Yeah," said I, who couldn't quite work out what the joke was.

"Thank god for that, I was thinking you were going to kill yourself, or kill someone. I can give you the vague terms, I'll write them down for you now."

And he did, he also offered to read any of the other medical jargon, turns out I had it covered.

Looking back I realise that I must have scared the crap outta him, and the relief on his face was easy enough to see. Andrew left the area about two years later, and then I was with another doc, who offered the same advice and am now with another doc who does the same, and actually trained under Andrew, so I think he'd heard Andrew tell the story more than one.

So yes, times before search histories and times when maybe it would've been better to Google! You have any funny stories about finding out facts from people other than the internet? Lemme know in the comments!

Email ThisBlogThis!Share to TwitterShare to FacebookShare to Pinterest
Labels: a book a cat and a cup of tea!, author's life, indie author, Joey Paul, joey writes, the creative process, the trials of a crime writer, writer's life