The Trials Of A Crime Writer: Hands On Research 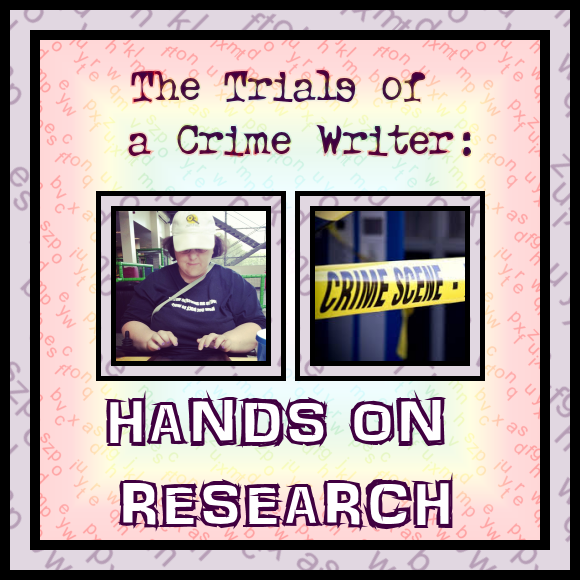 THE TRIALS OF A CRIME WRITER: HANDS ON RESEARCH

I thought about writing this piece for a while since it popped up on my list of blog posts to try. I don't know whether you know this about me, but I plan meticulously and then will do my vlog scripts and blog posts at the end of the month so that they're all ready for the coming month and such. I brainstorm every few months to add more ideas to the list. This was one that came to me, and part of me wishes that I'd had the idea to write down what sparked it in the first place, but beyond that I have some ideas about what I was going for.

See, I'm not really just a crime writer any more, I haven't been for a while, but I've continued this series because I have a lot of experience in writing crime and mystery and it seems like there's a lot of advice out there about other genres and vague tips for this one, and since I have that wealth of knowledge I figured I could share. But when it comes to research, that's something that I've found is a lot easier when you know someone.

I won't go into detail about who I know, it's no one famous of anything, a family member used to work for the local police force, and was able to put me in contact with various officers over the years to let me pick their brains. I've found that actually, depending on how you approach them, they're pretty open to discussing it, just as long as you're not expecting them to drop everything and do it right there and then, because y'know, they have actual crimes to solve.

I've talked before about how I've got other contacts through my doctors for medical information, and that's another thing that I think is pretty easy to garnish the same kind of thing. I wouldn't do it right now, with the plague still raging through the world, or at least my part of the world, because they'll be a little tied up with other, more important, matters, but there's nothing that will beat the ability to talk to someone who does the thing you're looking to write about.

Simply put, having someone cut up a dead body in a book is going to feel more real if you can reach out to say, the local pathologist who does this for a living. Some may be receptive, some won't, but it's the reaching out and asking, respectfully and honestly, that might net you some bits and pieces that you wouldn't get through just simply reading about it.

I remember when I was writing Lynne & Hope, and I needed a lot of the technical data for Lynne's job - she worked in a crime lab for those who haven't read the book - and I knew that while I could google it, it wasn't going to feel as real as it would if I talked to someone who had actual experience with this kind of thing. I knew I was never going to get a tour of the facility or be shown the tests happening in person, but I didn't need to do that to have some idea that I was going in the right direction.

It was that family member who was able to reach out to someone they knew and pass on my contact details. I had several long conversations with them, and then sent them the scenes in question (at their request, I didn't assume otherwise) and got feedback from there. These kinds of contacts are invaluable beyond just crime, but everything else as well.

So maybe that's what past Joey was talking about, maybe it wasn't, but I feel like having those contacts is the best way forward. They can be time-consuming to find, and cultivate, and you may get a lot of nos before you get any yes'es, but at the end of the day, it'll help you craft a better story, and a better reading experience for everyone.