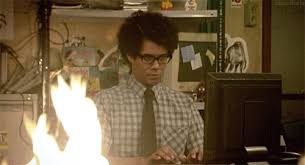 This seems to be a hot button topic across the reading, and writing, community, the idea that you should warn people of triggers that might be contained within the pages of your work. Some call it spoiling the plot, others, rightly, say that it's a good idea and allows people to stop themselves from delving into a story that's going to harm them mentally. You can probably tell from the way I said that, that I'm on the side of the latter. I don't see any problem with including trigger warnings. I think, coming from fanfic, that it's something that should be done a lot more, especially when you're writing in a genre that might not normally contain something, or if a scene you've written happens to be especially graphic.

At the end of the day, it's down to the writer, and sometimes the publishing path they've chosen, but for the Lights Out trilogy, I included warnings in the last two books because of some seriously dark scenes. It wasn't a case of written for shock value, but where the story went, and while you could argue that dystopian fiction is normally dark, I wasn't going to sit there and say that people should read my book at the expense of their own mental well-being.

So why is it such a controversial topic? I will say that people are starting to lean more onto the side of including them, but there are, as always, stubborn writers and readers who claim that it ruins the reading experience. I think it comes down to a lot of personal preference. I am disabled with chronic illness and mental health issues, there aren't any things that trigger me per se, but there are some scenes I'd rather not read at certain times. That's just my reading experience and I will, usually, tailor my genre choice around those periods, because you can't guarantee that a book in say, crime/mystery, won't have the very scenes I wish to avoid.

That said, I have noticed a lot more in the indie community, for those who write young adult, there are starting to be more trigger warnings included on the buy page, and the author's website. I don't know if this is because we're in a time when young adult's mental health is considering very important, or if they're just starting to catch on to the idea as a whole. I've seen some traditional published young adult authors do the same, though it's far from the norm.

Going back to what I said about coming from fanfic, I was a writer from my late teens until now, and while I have always written books, I also dabbled a little in fanfic (and no I won't tell you my fandoms!) Trigger warnings are commonplace there. It was seen as the polite thing to do, so that people reading could tailor their experience. You also included things like common tropes you wrote, which again is starting to happen in publishing too, and that's also not a bad thing. I don't know if it's a case of the publishing world thinking that we're the 'professionals' and fanfic is not (not a view I share by the way!) and therefore we don't have to pander to our readers, but I do think the trad and indie authors and publishers could learn a lot from the way fanfic works.

Think about it, if someone is looking, like actively in the mood to read something you've warned for, and it doesn't trigger them, you're gaining readers, and if you warn for common triggers, because you can't warn for every single one, then you're also sending the message that you actually care about the effect your work will have on potential readers, and how is that a bad thing? I think it's actually a really good, positive thing, and can have a good impact on you, your brand, and the books you're writing.

So what do you think about trigger warnings in fiction? Do you agree they should be commonplace? Lemme know your thoughts in the comments.