Spoonie Writer: Taking It One Day At A Time 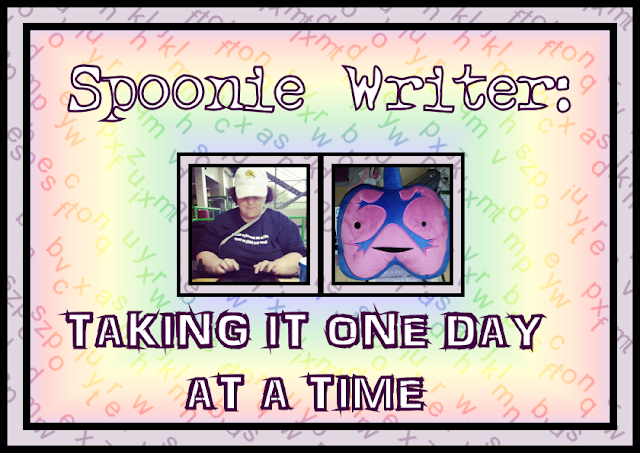 SPOONIE WRITER: TAKING IT ONE DAY AT A TIME

One thing that I learned very early on as a spoonie was that you had to take things one day at a time. There would be days when I would feel great, the pain and fatigue would be low, and my lungs would behave and then I'd get a chance to do the things I wanted to do. I was always careful not to overdo it, but something that happened and the flare up that came would knock me back. That said, there were other days when I hadn't overdone it, and was just wiped out no matter how much resting I did, and that's just the life of having a chronic illness. You learn to go between the ups and downs and make the most of them all.

When it came to writing, the same can be applied. As a spoonie and a writer, I knew that it was a careful juggling act to work out when to push, when to hold back, and when it was time to call it a day and just rest. I've been very fortunate in that I have all the time in the world to do what I want to do. I've found, through trial and error, a way that works for me, and because of that I generally know what I'll be doing one day to the next.

However, there are still times when a flare of something will hit me out of the blue, and I'll have to slowly crawl my way back up to the usual level of work that I do. That's why I wanted today to talk about the whole idea of taking it one day at a time as a writer, and as an author. So much emphasis, online and off, is placed on being productive, the idea that our worth is tied to how productive we are, how much money we make and so on, and in my mind that's simply not a way to do things.

I did a video on Auhorube about Hustle Culture (video here) and while I was nervous to share it, a lot of the comments were people very much agreeing with me. As a spoonie there's this idea that we can be 'good enough' if we push ourselves to get the same amount of work as an able bodied person, and again, that's not right. There is nothing wrong with taking things one day at a time. Sure you'll, hopefully, have good days where you can get a lot of stuff done in a short amount of time, but those aren't the norm, and that's okay.

I have never been someone who wanted to be an inspiration in the disability and chronic illness sense. I know that a lot of people admire the way I get things done, the level of organisation that I apply to most areas of my life, but at the same time, I feel like I need to be clear. None of this happened overnight. For a long time when I first started writing, over twenty years ago now, I had to work to a different kind of schedule, in that I didn't have one.

There were days, in those early years, where I felt like I wouldn't ever finish my book, that I wouldn't ever get to the point where I had more than one book under my belt. I worked hard, don't get me wrong, but when your body is actively fighting against you, it's a battle that you can't always win. Back in those days I was usually in hospital like clockwork every two weeks. I would spend that time as an inpatient and then another week recovering, before I'd be able to dedicate a little time to writing before the next exacerbation would land me back in the hospital.

It was slow going, and while my health has gotten better in some ways, and worse in others, I know that I'm very lucky to be able to manage the way I do these days. And even then, sometimes a flare hits and there's little else that I can do about it. So, if you're new to writing, or new to chronic illness, or both, and you're beating yourself up over the fact that you're not managing a lot in a short space of time, be kind to yourself, remember that it will take time, and there's nothing wrong with that.

As my editor, Kim, once said to me: it takes as long as it takes, and that's okay.

Any questions? Lemme know in the comments down below.